All good in the Tall Hood

My Week and Weekend:

WEDNESDAY:
Amanda was in town for a wedding and we had 1 night to see her.. so I got a group of us together for dinner.  It was GREAT to see Amanda, and to have Jess and Tonia who were in town for HTC, as well as my local buddies, Chelsea, Kerrie and Zoe. I met all of these women via Blogging and could not imagine life without them!!!
SATURDAY:
We had plans to go to the High School track but there was football practice so we went to the Junior High.  I wanted to see if Little Stud #1 could run a mile around the track but he wasn’t interested….so I strapped my Garmin to his wrist and let him run where he wanted….Up and down hills, around the soccer field… later I checked his wrist and he had gone over a mile..

Little Stud #1 has outgrown his bike…we went to a few yard sales with no luck.  I texted Grandma to see if she knew if Tall cousin had an old bike and she offered to buy LS#1 a NEW BIKE for an early birthday gift.  We met her at the store and he picked out a bike, helmet and gloves.. He LOVES his new bike, we have been letting him practice on the local tennis courts.  I am HOPEFUL that he catches on quickly so he can ride during our runs.  He is so darn CUTE!!! 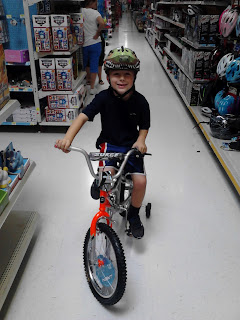 SATURDAY NIGHT:
The lovely Chelsea will be getting married end of September.  In case you didn’t know Chelsea and I met via Blogging, she introduced herself for the first time at the “Run Like a Mother” book signing I attended..  Since then we have become fast friends and I coached her to her first Half Marathon Finish Line.   Her bachelorette party in the city was this weekend and it was so FUN!!  Started with an amazing Cooking class- Look at this food, YUMMERS! This was followed by wine tasting and we finished the night with Pizza.. I rode with Kerrie and our parking garage closed at 11PM so we had to cut out early…but had a blast with the Bride-to-be

SUNDAY:
Tall Grandma texted in the am that she would watch the Little Studs so Muscle Man thought we should test out the trail I learned about during the Rainier to Ruston relay.  We thought it was partially paved, it was barely paved and mostly dirt.  I was not feeling well when we started, probably from being out late and not eating/drinking the best.  The trail was basically single track so I let my hubby lead, he took the spider webs for me J  Trail running for me is much harder, I can really feel my stabilizer muscles working overtime.  I loved being out in nature and the trees provided great shade on a hot day.  The little town of Wilkeson is so cute, I know Muscle Man will want to come back soon!! 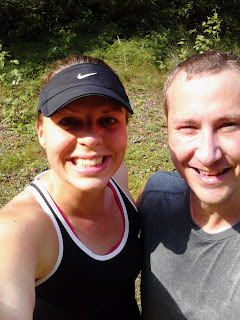 And we had another GREAT output from our Family Garden.. LOVE LOVE fresh produce!! 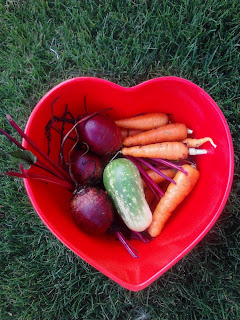 Hope you all are doing well.. I still have a Product Review Post in the can COMING SOON!!  Includes the Clean Bottle Handheld shown above...
Posted by Mel -Tall Mom on the Run at 9:31 AM
Email ThisBlogThis!Share to TwitterShare to FacebookShare to Pinterest

I was supposed to run HTC this year and had to pull out 2 weeks before the race. I sprained my ankle in early July and it still isn't healed. It was a bit frustrating to see my teams posts and wanting to be with them. Glad you had a good rest of your weekend!

Mmm, veggies fresh from a garden! Love it! also, I love that you're getting into trail running. Keep it up!

That trail looks heavenly. Happy for you that you two got some "alone time" running. :) Yummy produce! I have big visions each year of putting in veggies and then the spring gets away from me (running!) and we never do... Thankfully I have neighbors who spill their extra produce onto my porch! :)

So happy I got to see you, even if it was brief. I miss you so much!

It sounds like you still had a pretty amazing weekend. Hugs friend!

SO glad you got to get all the girls together!! Little Stub looks so ready to roll on his new bike! Too cute! It is so important to have someone take the spider webs for you...worst feeling is a web in the face when you're all sweaty!! Yuck!

Looks like a great little trail. It is so great that you and hubby are running together! What better motivation?!

Beautiful trail and what a cute bucket! That makes veggies look even better :)