I registered for the City Blast 10K less than 2 weeks ago, I was on the fence on if I wanted to sleep in on the 4th of July.  But when Kerrie said she was running I could not pass up the chance to re-unite with my LRB (Lunch Running buddy).  Before the race we got our packets, went in the Real bathrooms, posed in front of the fountain and had our photo taken.  There was a Mom and daughter dressed very festive and cute, the Mom took our photo.  I love seeing families active together..  The race starts and ends at the Puyallup Fair and was very well organized. 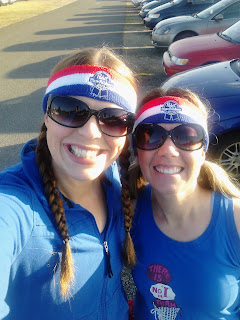 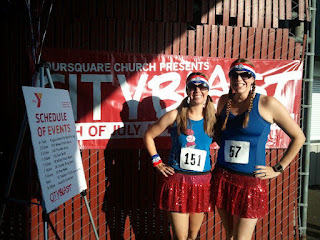 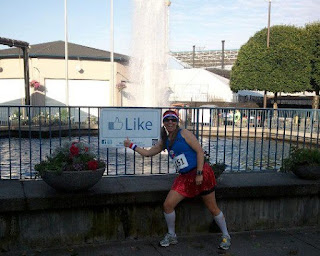 We made our way to the start area because the 10K started first.  The race announcer was awesome and told us that he loved our outfits.. BONUS!  I tried to get the Race photogs attention but now luck, he was the same guy as at the Black Diamond 5K I did a few weeks back.

Kerrie and I had one goal, to enjoy the run.. I set out with little expectations, was not sure what my foot/ankle/arch would do, it has been pestering me. As we set out I felt GREAT!! The skies were clear, we looked cute in our Team Sparkle skirts, and I had my good buddy by my side.
The course started at the Puyallup Fair and toured the streets of Puyallup, most of the course was flat except for the GIANT-LEG-KILLER- HILL on 15th st. This is how it went:

Mile 1- 8:08- We started a little fast and tried to slow ourselves down, plan was to hang around mid 8:00's.  this pace felt comfortable as I scanned the race field in front of us.  Kerrie and I had not run together for a while, I liked having her with me.

Mile 2- 8:49- There was a long straightaway with people cheering on the right, they were super spunky and cheered for EVERYONE.  I love people like that.. THANK YOU!!  I know the streets so I knew that just after the little water stop we would take a left to the HILL.  Wow was it tough, my legs wanted to stop so badly, but we pushed through…barely.  It felt AMAZING to be on the other side and see the Garmin chime with a sub 9:00.

Mile 3- 8:12- There was a man running with us who told us that if he stayed with us then he knew he was doing good.. What a compliment to receive mid run, it gave me a little boost.  Kerrie made friends with the man whose name is Clark, Thank you Clark for helping my confidence mid-run!!   Kerrie could see I was feeling good so she told me to go ahead.  I was hesitant because I have been burning out at the end lately, but if she caught up that would be GOOD.  I told her I would see her when she caught me on the HILL and took off.  The course would repeat so I knew what was to come.

Mile 4- 7:58- This stretch was flat so I gained some speed, I knew that I was going to slow the second round on the HILL.  There were Police Officers at the road crossings, one of them was on his cell phone, I was pretty hesitant as I crossed, scared me.. This stretch also had a few people out cheering, people love the Team Sparkle skirts there was no shortage of compliments which is FUN!!

Mile 5- 8:42- As I turned to the long straightaway for the second time there were 5K walkers EVERYWHERE.. I weaved around trying to keep a good pace, then came the HILL. I changed to short choppy steps but gravity was pulling on me.  I was barely at a crawl so I walked about 4 steps.  My legs and ankle were burning.  I felt silly struggling with all the people walking around me, they had no idea I was running the 10K.  So I jogged and made it to the top..

Mile 6- 7:50- Downhill and toward the Finish..it was FLAT! There was a lady in pink who I was trying to catch the whole race, I kept my eye on her and listened to my music. I was not tired but could feel my form fading.  We were weaving around the Fairgrounds, a place I have been many times in my life and bring back good memories.  A man in cacky shorts passed me as I started picking off a few runners.  The Finish was getting close I could feel it and I still had fuel in the tank.. SCORE!!

Last .2- 7:16- I caught up and passed the man in cacky shorts and he said, "Good job, now run on your toes, it will make you faster." Wow was he right, I really need to work on my form it helps..  I tend to run feet out and on my heels.  I could see the gal in pink about 10 yards ahead, I had closed the gap but not quite.. I smiled and waved as I crossed the Finish Line. 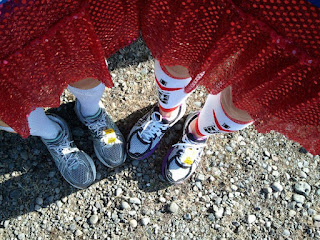 Just after the Finish my friend Heidi was there with a High Five, I wanted to talk to her but I felt the urge to SPEW and did not want to puke on her.. Sorry Heidi!! I found the water, chugged some down, grabbed one for Kerrie and headed to watch her Finish.  She came in strong a minute or so later.  As we got some fruit I saw the Mom and her daughter, the little girl looked so HAPPY so I told her congrats...later in the day I got an email on Facebook from the Mom who is a reader.. She said that her daughter was excited that I told her good job and thanked me.. Made me melt!!  Thank you Christy for reading, next time say Hi.. I don't bite :)

We checked the Results but they seemed a little off, I don't remember seeing 5 gals our age in front of us??  We took 6th and 7th in our Age group..  My goal was to have fun and feel good at the Finish and I did.

Later that day Muscle Man went for a solo 10K run, he is so dedicated...next Half together on July 15th and it is a CRAZY one!!  Later in the day we headed to Tall Sister’s for Dinner and Fireworks.  Below are a few Family 4th Photos. 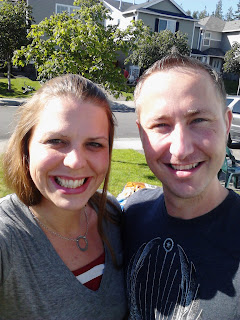 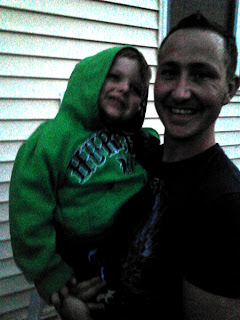 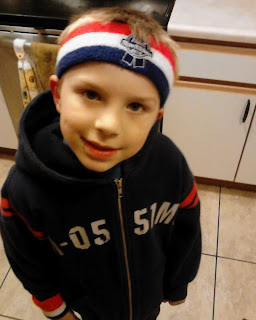 Have a great weekend!!
Posted by Mel -Tall Mom on the Run at 7:53 AM
Email ThisBlogThis!Share to TwitterShare to FacebookShare to Pinterest

Glad the fam had a great 4th!

Love that LS#1 was sportin' the headband, too! Fun race! (Except for the hill.) Thanks for going with me! I would've been lonely by myself. :)

What a fun day! I love the outfits. Great job!

GOsh you would think I was still preggo - reading about the little girl with her mom brought on the tears!

I hope one day my little girl runs with me :)

WHOA! Look at all those miles in the 7:00 range...awesome! Great job ladies!

Great job Mel! And I love those outfits - so cute!

I want a pbr sweatband!!! Those are so awesome!! Where did you find them?

Your outfits are adorable! :)

Looks like so much fun! I love all of your pictures :)

Looks like so much fun! I love all of your pictures :)

congrats to you! I always love your running outfits but this one was SUPER cute!!!

Sounds like a blast with Kerrie! Great job and as always-cute attire!

We start off early watching television and then envisioning our American dream. As a child, we play with our babies, doll houses, and writing in our diaries. We start at the tender age of 4 or 5 looking for our prince charming to marry. Over time, we replace our crushes of princes and other Disney characters with real boys. Sometimes it is the boy that sits next to you in class or a movie star. Either way, it is getting you ready for that all important task called LOVE.........