This was an eventful Weekend in Running.. First below are the details for the RNR Seattle Blogger Meetup.  I have posted on Twitter and Facebook as well.  Everyone is invited, you do not need to be a Blogger. 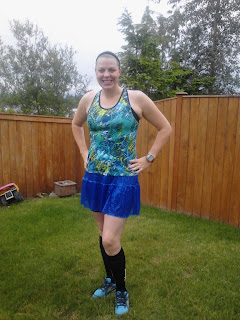 I was prompted to run this race by my Fleet Feet running buddy Janna.  MM and I knew we were not in 5K shape but wanted to get a baseline to start training for shorter races this Summer.  The race start was 15 mins from our house!!   We had some time to kill and did a light warm-up as I checked out the field.  There was a gal warming up, we had looked at the times for the previous year and I knew I had a chance to place.  When I saw her I had a feeling I would not be taking 1st

We set out after some confusion on the Start line, around the track and out.  I forgot my Ipod!!  I was forced to listen to my breathing..  I started out strong keeping my pace in check.  I wanted a sub 24 and hoped for about 7:20 overall pace, a lofty goal but worth a try. 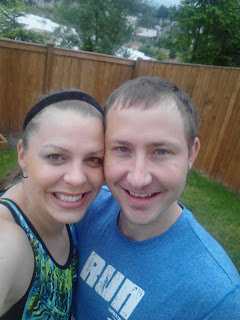 7:12- Flat first Mile, feeling good and cruising along.  I lost Muscle Man right away but kept on, we had a little race going between us and I was determined to WIN.

7:52- My legs started to feel heavy and my breathing was labored. I saw a young girl, female #2, about 100yards ahead of me and tried to keep her in my sight.

7:58- My lack of speed-work was obvious, I could barely hold under 8:00 pace. We were weaving around the sidewalks and roads of the little town around Buckley and I was getting a little confused, I really have no sense of direction.
The Race finishes on the track.. I could see the young girl but I did not have a kick left in me. I rounded the corner where I heard someone yell my name so I smiled, it was Carla, she snapped a picture.. THANKS CARLA!! If I could have kicked it I would have met my goal... still I am happy with the effort I gave. 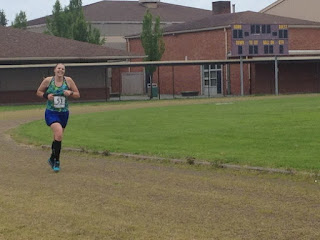 .15- 7:28- I finished and the young girl nearly collapsed, she gave it all she had.. She has a future in running for sure.

LOVE LOVE Small town races and would recommend this race to anyone who likes flat and fast courses. Thanks White River 5K, I will be back!! Muscle Man finished a little over a minute later and got a new PR!!  I hope to get some pictures from Janna and Ontherunevents soon.  There was some confusion as they handed out awards, I was put in the wrong Age Category.. hopefully the person who really took #1 in the 35-39 gets her ribbon.. 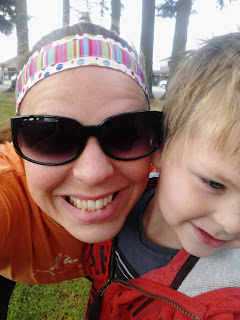 As we drove to the trail there were DARK clouds in the distance, I worried that we were about to get hit by a crazy storm.  I gathered all the boys and our stuff, we hit the restrooms then headed out.  MM and I had sore legs from the 5K the day before.  I honestly had no idea how I would make it through 10 miles, the top of my right foot and ankle were very sore.  As we hit mile 1 the sun came out and it got very HOT and muggy.. UGH!!  We both had overdressed for sun.  We traded off and I pushed for about a mile. 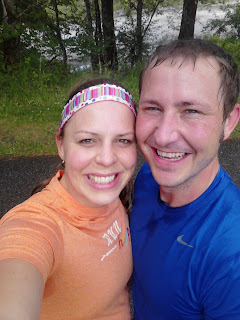 After the little hill we stopped for a photo and to give the boys Snack #1, granola bars, they were watching Star Wars and seemed content.  On we went.  At the mid-way point we stopped again, we Gu’d and re-hydrated and gave the boys Snack #2- Ritz crackers.  About the time the clouds closed and the rain started to fall lightly, it felt AMAZING!!  We asked the boys if they wanted the rain cover but they said no…I sorta felt like a bad parent as we passed the recreational bike crew.
Just after Mile 7 chimed we saw a Bald Eagle fly overhead with a beak full with a long stick, it was pretty cool. By this time my legs were starting to feel good.  We stopped one more time for a drink and for the boys to see the Emu, we let them walk a bit because they were getting antsy.  Next we found stick guns and light sabers to keep the Little Studs Occupied and hit the road for the rest of the run. 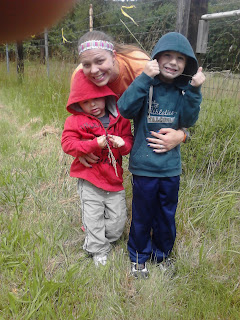 DONE- The rest of the day I let Muscle Man relax, I did the dishes, swept, did 5 loads of laundry, went to Target to let the boys pick out MM’s present and cleaned my closet.  I am TIRED!!

Posted by Mel -Tall Mom on the Run at 8:50 AM
Email ThisBlogThis!Share to TwitterShare to FacebookShare to Pinterest

Sounds like an awesome weekend! I love that you all can run as a family! So fun!!

Great job! Congrats on p,acing 1st...awesome! I love that you and hubby are running together, so sweet and a great way to spend time together. Love all your pics!

Congrats on 3rd female overall - that is pretty amazing! LOVE your pink shoes :)

I cannot believe that you ran a 10 milers WITH your two sons. That is awesome!
PS - I love you hot pink shoes! I am a Brooks lover, might need to look into those. :-)

Wish I was coming next weekend!

Wish I was coming next weekend!

I can't believe you can race a 5k the week before a half! 5k's take it out of my legs big time! I love the pink shoes!

My kids turn sticks into lightsabers immediately too. I don't know why I bother with toys when all they want is dirt, rocks, sticks and sometimes water.