Back in 2009 I was new to Blogging and pretty new to Running.  Somehow AJ (Amanda- 5Miles Past Empty) and I stumbled upon each others blogs.  Crazy that we lived so close and had no idea.  I lightly convinced her, via the help of my bloggy friends, that we should meet for a run. 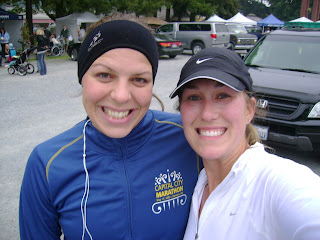 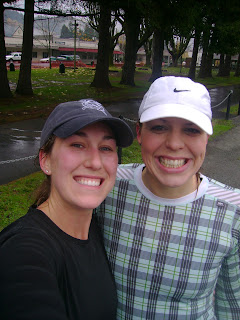 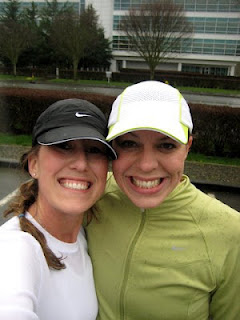 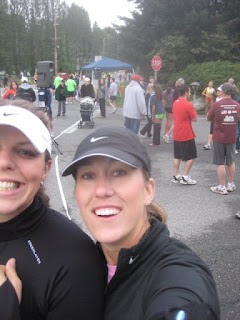 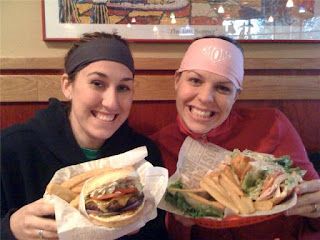 The Mercer Island Half Marathon was on Amanda's Birthday in March 2010.  I had planned to run with her and pace her to a PR.  Somehow we didn't connect so we went on alone.  The race was HILLY and HARD.  I finished ahead of my friends and headed to get some water.. Soon after I texted my friend to see where she was, she replied.  As I walked her way I could see the PRIDE in her face, she had earned her PR, the CONGRATS HUG had us both in tears.  That hug still ranks as one of my all-time best post-run memories.
AJ is my first close friend in a Military Family, so it was a huge blow when AJ told us she was moving..  Moving away?? And to North Carolina??  We knew for a few months, and dreaded the day when she would hit the road.  I shared our run-lationship with the world through PBA-Public Blog of Affection: 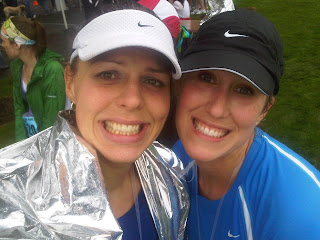 AJ was training for the Portland Marathon, after the Marathon they would move to North Carolina.  My buddy Jill and I grabbed our umbrellas and set out to cheer her, and others on.

It was a TOUGH day, torrential rain before the race even started.  AJ wanted to quit early on, we offered to drive her back, but she kept on.  I ran a few miles with her to keep her company, not knowing that would be our goodbye, we didn't connect after the race.  All of this on our Friendiversary 10-10-10. In that instant we began our Long Distance Run-lationship.

***6 days later my Dad died unexpectedly of a heart attack.

I was lost, my heart broken, I didn't know which way was up.  I NEEDED something to look forward to.  When AJ told me her friends couldn't run the Las Vegas Rock N Roll Marathon in December with her and she didn't want to run solo, I registered the next day.  I was not trained for 26.2, all I knew was that I wanted to be with my friend, to feel something other than sadness.  Up until mile 18 I was great, we held strong together.. Toward the end and after the race it was not pretty, I prayed to multiple gold garbage cans in Vegas.  AJ took care of me, and we salvaged what was left of our trip. 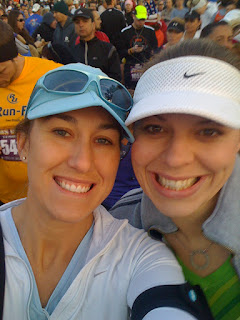 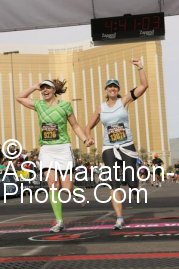 Running a Marathon with someone bonds you forever, she helped me through when I leaned on her and vice versa.  When AJ came for Rock N Roll Seattle June 2011, I knew I wanted to run the Half with her, regardless of Finish time.  She was running to raise money for cancer to honor her Dad.  Stride for stride with my buddy, all the way to the end.  Those are the memories I cherish, time spent with good friends. 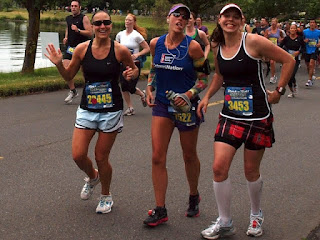 ***A few months later AJ suffered the loss of her father to Pancreatic Cancer.

I hated that I understood what she was going through. We are too young to both lose our Dads!! GAHHHHHHH!!!  I did what I could to empathize and support her being so far away, I felt helpless.

Through ups and downs, PR's and injuries, miles and miles distance,  we have stayed close.  Texts, phone calls and care packages keep the Run-lationship alive.  Here we are nearly a year since we have run together or seen each other.  And I see the Oiselle contest HERE to win a FREE trip to the Olympic Trials.. Hmmmmmm!!!  I sent the info to AJ instantly.

Oiselle, a company I love, would help me and my run buddy to reunite! And we would get to experience the Olympic Trials at Hayward Field!! What?!?!?!  Summer after 11th grade I watched the Olympic Trails at Hayward Field with my parents, we happened upon the event while touring the college.  I remember how AMAZING it was to be in the presence of greatness.

This year my cousin Ryan will be throwing the Javelin in Olympic hopes at Eugene.  My family on the field gunning for London!

-We want to have a blast hanging out with the STELLAR people of Oiselle, hamming it up at a Fashion show and playing in the nest.

-We want to CHEER our hearts out at the trials, for all the athletes and cousin Ryan (bummer he will not be competing the dates of this Giveaway).

-We want to reconnect through an EPIC OISELLE Weekend!!

That is our Story..

Video on 5 Miles Past Empty COMING SOON!!
Posted by Mel -Tall Mom on the Run at 11:05 AM
Email ThisBlogThis!Share to TwitterShare to FacebookShare to Pinterest

What a touching post! A true friendship to last the year, no matter how many miles are between you. GOOD LUCK! You both deserve it!

What an amazing story. I hope to find a running pal like this one day. I lost one to the Upper West Side last year...DARN NYC with enviable neighborhoods!

You both are so strong! I VOTE for you and hope you guys get to be part of this cool opportunity!

Hurray for PBA! I hope you guys win and come down to Eugene.

If the public gets to vote, I would vote for Team MelAnda in a heartbeat!

I don't know you very well, but I do know Amanda is a very special woman. The world is better for having her.

Such a touching post. I have been reading both your blogs for quite sometime. Fingers crossed!!!

You are pretty amazing Mel!! I am so blessed to call you friend each and every day! Through many many tears you have held my hand-if not physically then emotionally, and I can't thank you enough...

Awww I love this post!!! You both are amazing runners and women! Good luck!