7-9-2011 was the First Annual Miner's Day 5K in tiny Black Diamond Washington. I found out about this race through my buddy and fellow RRCA Coach Erika. Her WONDERFUL sister was the Race Director. I tried to promote the race so the T-shirt had my Blog name on it, which was GREAT! I was also given Bib #1!!

We had a little difficulty finding the start area, but were soon set... 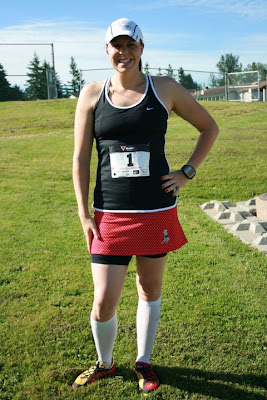 Me Pre-race in my Running Skirt and Brooks Green Silence Shoes and FAVORITE Run Happy Hat. 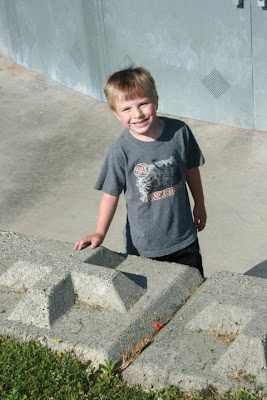 There was a skate park which the boys used as slides, they were pretty cute, running and sliding. 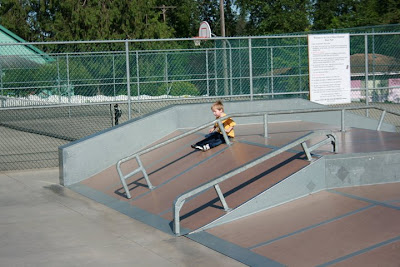 Soon we settled in for pre-race announcements. I looked around... Hmmmmm lots of fast looking guys but not too many ladies..34 people total. OK then, guess I will try to keep up with the guys. I did a Half mile warm-up, felt silly running too much with such a small field. 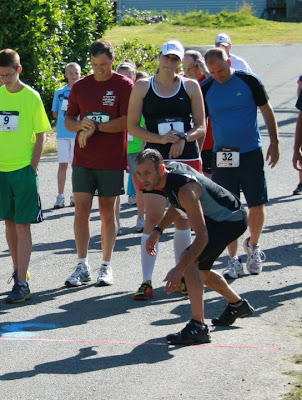 That photos cracks me up!! What am I doing, the guy just in front of me is FAST, he won. 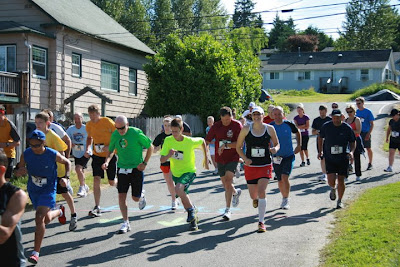 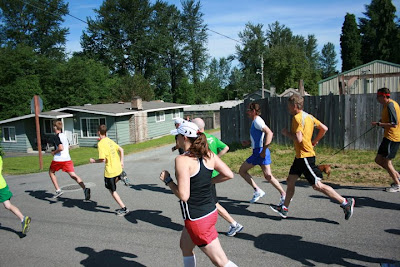 Mile 1= 6:41
This mile was GREAT! I held back so I would not burn out, for once I wanted to race smart and save some for the end of the race. Most of the mile was downhill and through a neighborhood. I felt strong and was kicking it with the big boys. My stride was fluid.

Mile 2= 7:33
This was on a gravel trail with little hills. I had a hard time finding my footing and my knee started to BURN. I am not used to uneven surfaces and my lack of shock absorbers, 2 knee surgeries on my left knee, makes for a painful run. I passed a young male runner in a yellow shirt on the uphill, my Green shirt buddy was just in front. The path went through wetland areas which was very pretty!! On the return I saw the 2nd place female, I smiled and said "Good Job." There was a girl who looked maybe 13, she had taken off her racing shirt, probably got too hot. She was ADORABLE and did really well.

Mile 3= 8:25
Out of the gravel and the HILLS that had helped me early on were coming back to haunt me. My legs were toast and I could feel the lactic acid building. I realized my STOOOPID shoe was untied, Rookie mistake! I stopped to tie it and got passed by 2 people. UGH!! Back UP UP UP.. Ouch, I do not like hills!! It was a relief to make it to the top but I had lost precious time. I was SLOW and pretty mad at myself.

We took a right and ran down down down a steep hill, hmmmm, pretty sure this means that there is a KILLER hill on the other side. Zoomed around and there is was, the LEG TRASHER HILL. .2 left and a HILL! I tried to get my legs to work but they were done. Sprinting up hills is not fun, good for me, but not fun. I could hear clapping and knew I was close. Turned the corner and could see the Finish. I knew Muscle Man and the Little Studs would be waiting, and taking pictures. I tried to look strong, but I was TOAST!! 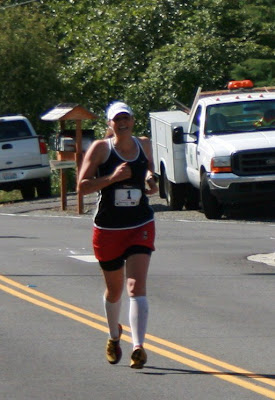 #1 coming down the last stretch. 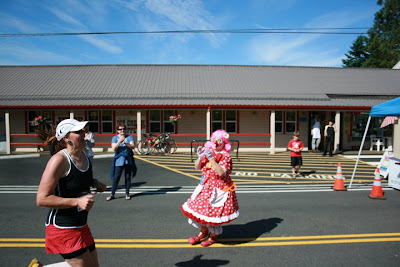 CLASSIC Tall Mom, mouth wide open, hair bouncing, T-Rex arms, and a clown?? AWESOMELY bad picture.. makes me laugh!! FYI I will be doing some arm work after seeing this photo, wow have I lost muscle. 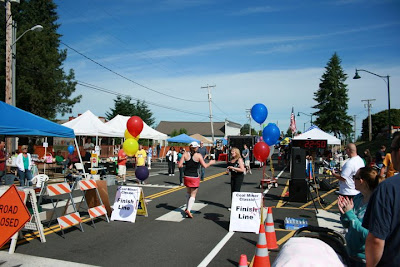 And to the Finish where I was greeted by the amazing Race Director. I told her that the course was TOUGH and HILLY, she said she meant to run it before, I told her she should do it to see, wowzers!! 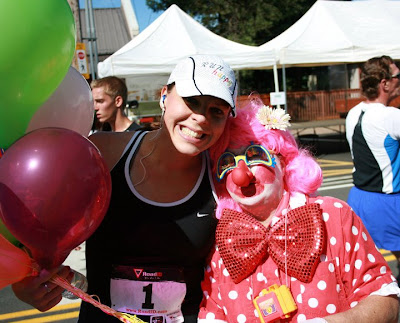 The boys wanted Balloons and I could not resist posing with a Clown, only in Black Diamond. 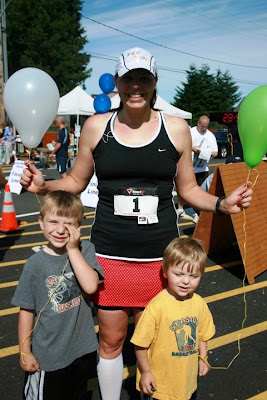 What a TREAT to have the Boys there, they were really good for Daddy. 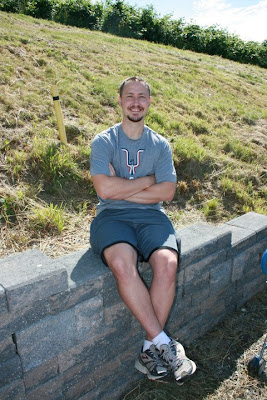 My awesome Muscle Man hubby, this will be 2 weeks in a row as I have recruited him to drive and take Pictures for See Jane Run Half Marathon this coming weekend. Love you honey!! 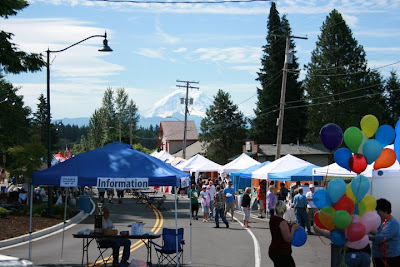 One TREASURE was the amazing day and seeing Mount Rainier in the background. There were fun booths, a chili cook-off and trains that the boys explored. AWESOME! All in all a GREAT day! Yes I struggled, yes I feel less than stellar on hills and speed, but a Wins a win!!

Posted by Mel -Tall Mom on the Run at 7:52 AM
Email ThisBlogThis!Share to TwitterShare to FacebookShare to Pinterest

That sounds like one tough 5K! Way to hang with the front runners and finish strong for first female! CONGRATS!!!

Great job! You did awesome even with hills. It was a good weekend for a 5k, I ran one too and Pr'd.

WOW! Great job! Congrats on 1st female and way to push through! Such an inspiration!!!!

LOL LOVE the pic with the clown. Great finish!

I am running See Jane Run, fwiw over the past two weekends I ran the entire course. It kinda sucks, there are just some weird parts (why they couldn't put us up on Eastlake Ave instead of Fairview..ugh). And then two out and backs (especially passing the finish line...I"m going to hate life right there).

Great job on the 5k! That's a great time, especially considering all the hills!! That clown picture before the finish is hilarious! I'll be at See Jane Run. I'm hoping I get to meet you! :)

Awesome clown photo! I am only running the 5K at the SJR. I agree with Danielle C. the half course looks kind of sucky with the two out and backs and passing the finish line and having to run back to it. Good luck to everyone running the half.

Sorry it was so hard on your knee. Way to kill it anyway and get first place! Super fast in my books!

you totally got photo-bombed by a clown. ;-)

Great job! 1st place female is awesome. You'll be the chick to beat next year!

Do you think the race director will stick to that course, or will she have sympathy and re-route it?

A couple things 1 good job ! You run uneven just like me haha 2 I was in Seattle too this weekend 3 I totally refer to myself as t Rex arms too! Short and skinny. Well have to do lots of Dino impressions at htc :)

That clown photo is awesome! Congrats on the win!

LOVE the clown photos! Haha! I can see my beloved Black Diamond Bakery in the background. Yum! Congrats on the win, lady!

Oh and I'll be at See Jane. hehehehe

Awesome job Mel!! Congrats on the WIN! Sounds like a fun race.

Congrats on a great finish on a tough course. I see a family friend in the first few photos--he kicked it too. And I don't know what you're talking about--you look svelte and sleek to me!

Anyway, the pics are awesome, I just wish we could look awesome in a run pic! My mouth is always hanging open too!

The clown freaked me out.
The picture with the speedy guy crouching made me laugh.
That first mile shows you've got that speed in you.
Congrats on rocking it!

awesome job! First female - I've never been first anything...well once I won my age group, but there were only 11 of us. Congrats on a great race!

so proud of you friend, way to push through!

way to go first female! I'm so glad to read that someone else feels silly warming up. IDK why, but I feel so weird running before running!

Awesome!! I love that you post all your race pictures, even if they are not flattering. You are hilarious :D

I wanna finish a race with a clown in the background. That pic is priceless. I also wanna run a 6:41 first mile and say that I was holding back (I wish!). Great job on the race. Kinda sneaky of them to stick in so many hills, eh?
Cheers and happy running,

Way to go speedy. Saturday could not have been more gorgeous. Great day to be outside and racing well.

Love that pic of you, open-mouthed with the clown! Hilarious way to finish :) You are Ms. Speedy thing! Way to go!!!!

You always have the most awesome pictures!! Love the starting line picture...to funny! That guy meant business!
Great race!

For not loving hills, you certainly attack them well! H2C training=hill work right?

Fabulous family pictures as always and you make me want to get a running skirt. YOU ARE ADORABLE!

Great job at the race! You killed it girl!

I will be at SJR this weekend!! Woo Woo! I will only be doing the 5K though... dang shin splints! :( Is there going to be a photo op pre race?