On Friday of last week Muscle Man Texted me..

"You think you can run 10 miles with me tomorrow or are you out of shape ;)"

"Why not kill myself will be a beautiful day and get to run with pretty girl :)

So we made a plan. I still am not entirely sure what got in his head, he has not run more than 4 miles in over a year and 7 miles is his mileage PR. Plus we had no childcare. True love, a Man willing to test his limits to be with his wife :) 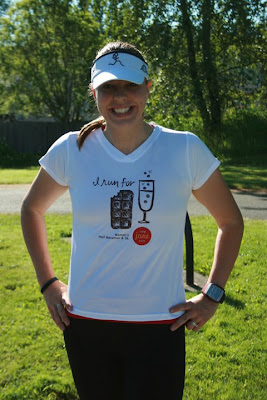 Since I am the See Jan Run Seattle Blog Ambassador I got a cute See Jane T-Shirt!! REGISTER HERE or wait a day and try to win a spot tomorrow!! It was hot so I pealed off the shirt and ran in a tank top, which quickly was flying up and exposing my mid section so I had to tuck it in DORK ALERT!! 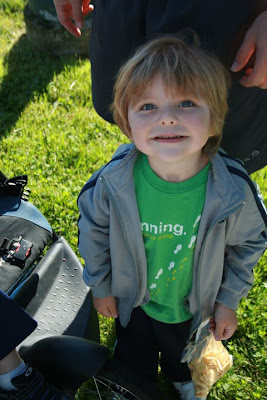 Little Stud #2 is in major NEED of a haircut!! We had juice, snacks and their DVD player with Megamind spooled up. 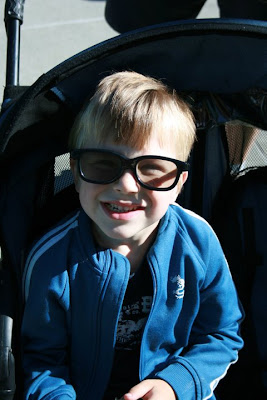 Little Stud #1 found these glasses and wanted to pose wearing them, pretty cute. Muscle Man knows the boys patterns since he is a stay-at-home Dad, he knows they are more relaxed in the early hours so a morning run would work. At Night they are more likely to try to jump out of the stroller making 10 miles impossible. 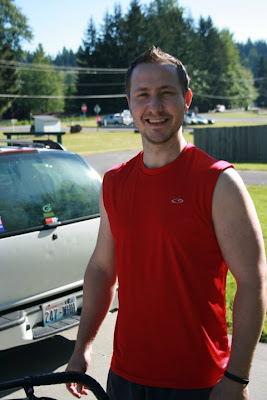 My Man ready to run! I am sure he had doubts at this point but we set out anyway. I knew the Rainier to Ruston would be starting on the trail but we would not see runners until the return trip, we ran under the bell and got going. It was cute to see Muscle Man notice all my favorite parts of the trail, spots he had never seen before. The River, birds and sun, it was the PERFECT day! Besides all the bikes, I had to dodge behind the stroller often with the high speed folks passing. The boys were settled and we chipped away at the miles. After about 4 miles Muscle Man started asking me more often what mile marker we were at, I could tell fatigue was setting in. We went 5.2 miles so we would end before the Rainier To Ruston checkpoint and stopped to refresh.

ROOKIE MOVE! I did not pack enough water and no Nuun/electrolyte, I am used to my training partners packing their own so I did not double to figure out how much we needed. Muscle Man probably could have used some Nuun, he would not take the Watermelon Gu Chomp I offered. The one hill on the trail was just after mid way, so we let the Little Studs out to run up it. 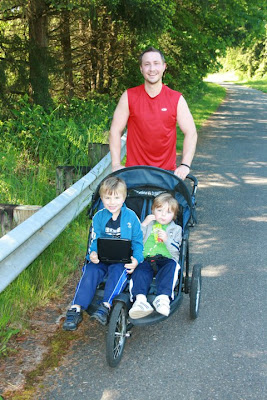 LS #1- 57 + LS#2- 42= 99lbs!! And that is just kids! Muscle Man pushed himself and well over 100lbs for 10 miles without stopping much at all! The kids liked stretching their legs so we took a few pictures then got back to work 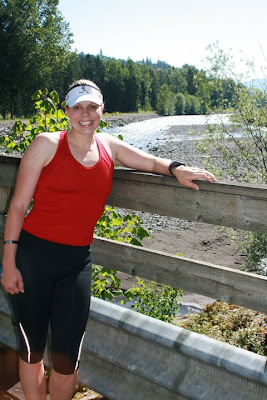 Finally got a photo of one of my favorite spots on the trail the bridge!! This bridge has puddles across it most of the year, but on this day it was glorious!! Note the Rod ID and dorky tucked in tank top.

Around mile 8 my hubby started to FADE...I knew it would come he had not trained for this. I offered to push the boys but he said the stroller was holding him up. When he trains for a Half Marathon someday (I have full confidence he will now) he will need some solo runs to work on his form without pushing :) I pulled out my coaching tricks and we did some walk/jog/run miles. He is so tough and did not complain although I knew he was hurting.

Around this point we saw the Rainier to Ruston 50K folks including my buddy Janna!! I offered to run parts with her but she never got back to me, so a family run was my next option.

He respects my running and the pain I push through, now he was experiencing first hand what I go through for Long Distances. He pushed and the end was in site!! The last mile was tough, but this was the area we have run a million times, he perked up and finished strong. We let the boys out and worked toward the Rainier to Ruston Madness. 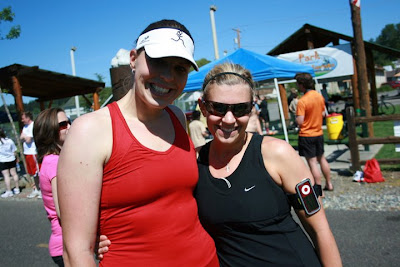 Guess who we found?? Jill HERE she was there to support a friend running the 50 miler!! Although we live close we don't see each other often it was nice to see my buddy, she is looking super fit!! Poor Muscle Man was parched, we ran out of water, he left to get a drink from the latte stand nearby. 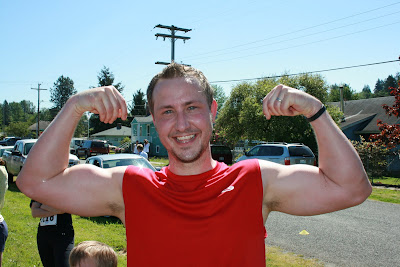 When he got back I took this photo, I did a flex pose after my first double digit run, so I figured he needed one too. This is why I call him Muscle Man :) 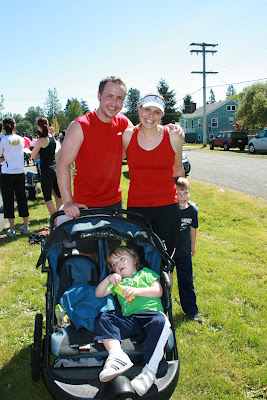 Jill took a family picture and we stood around for a bit to cheer on the Runners. What a GREAT DAY!! I am so PROUD of my Husband and new long run buddy. After the run he was wiped so I took care of him like he has taken care of me countless weekends!! We had company come over later that night so I had to clean and shop....more about that later!!

Posted by Mel -Tall Mom on the Run at 7:40 AM
Email ThisBlogThis!Share to TwitterShare to FacebookShare to Pinterest

MM has *totally* been sneaking in runs on you. ;)

Just kidding - what a great story & pics to read on a Monday morning after such a great weekend!

WOW! He is a muscle man to run 10 miles AND push two kids. If he didn't have to push the kids I bet he could have gone farther.

YEAH MUSCLE MAN! Congrats!!! :) It boggles my mind that someone can just go out and run 10 miles - it took me months to achieve that milestone! Good stuff.

Love all the photos - your family is so cute and I love your matching tanks. :)

What a fun report! You, MM and Jill are all looking great.

This weekend, hmmm, guess who placed third OVERALL female masters in her half marathon?

WAY TO GO D!!! I do love your coordinating outfits...awwww, you guys are beautiful together!!

the whole time i was thinking, "he pushed those two kiddos for 10 miles? geesh." nice work, MM!

You guys are so adorable! :)

I'm still working on getting my husband to run with me period.

Looks like a great way to spend some quality family time! Way to go MM!

You guys are such a beautiful couple!!
Hello guns! Yes I can see why you call him muscle man.

Awesome job on the 10 miles!

I can't wait till my love wants to run more than 3 miles with me :)

I got my travey to run 3 miles with me on Easter, none since. In his defense he's been working 16+ hour days now that VT has nice weather. He did volunteer to run a leg of the VT CIty Marathon when one of my relayers got sick and coudn't run. He was super happy that I found someone else
Great photos!!

Way to go, Muscle Man! And pushing the stroller, too...wow!

I push my limits every time I'm out on my mountain bike...because I'm 100% chicken. Had a great weekend...long bike ride with my sister-in-law, gym with my husband, and long afternoon of volleyball with my kids and friends. Fun, active time!

Your family is so inspiring! You (almost) make it look easy. ;-) I know it isn't. Fitting in everyone's needs and respecting everyone's dreams, that is a tough balancing act. I admire how you guys make it work!

My weekend? s'ghetti celebrated (I dreaded) leaving the single digits behind, she is now 10 yrs old! I ran (not enough). We swam. We (over) ate. We beautified our yard. It was a great weekend!

Keep your heart happy! I know it wants to be sad now.

I love this post.
One of my most favorite things about running is having my amazing hubby there by my side on many of my runs!