This weekend my 3 runs were VERY DIFFERENT... let me tell you why.. 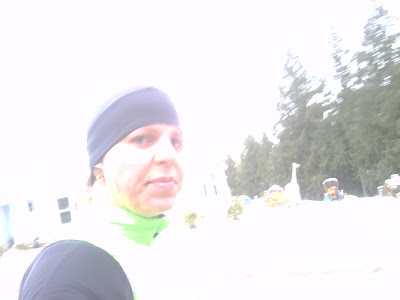 I almost deleted this picture....but it really shows how I felt and the lighting is weird so I posted it... UGH!! Note the life-sized Giraffe in the background, this would go well with the life-sized Polar Bear I saw a few weeks back.. I called it quits are 10 miles and went home to rest up and warm up. My run started FAST and ended shuffling..

After relaxing I knew I had 8-10 more miles to get in. Muscle Man moved the treadmill directly in front of the TV and I started "The Proposal." Gotta love watching Ryan Reynolds and Saundra Bullock :) I covered the Treadmill screen and just ran.. I was dripping in sweat and I the towel I had smelled like detergent and made my skin sting. I went through my water by mile 6 and had Muscle Man rescue me. The movie kept me entertained. As I was about to decide if I wanted to go for more than 8 the boys said "Mommy it is our turn for the treadmill." I could not turn them down.. RUN DONE!!


STATS: 8 Miles 8:45 Pace
Amy and I met up to head to the Soos Creek trail on Sunday morning for my RECOVERY RUN with Kerrie HERE and Zoe HERE. I brought my little phone camera and tried for a group shot.. 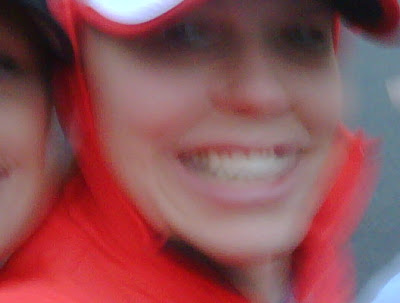 OOPs it was zoomed in and I did not realize that my memory was full so the camera deleted the actual group shot. FAIL!! We all chatted for a bit then started the run... 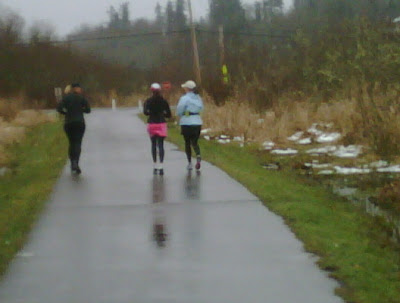 Most of the trail was clear, but the bridge sections were pretty icey/snowy. WE saw a snow shaped arrow on the road which was kinda cool, I should have snapped a picture because it was gone on the return trip. We did some bird watching.. this is out of order but there were loads of ducks and something STRANGE.. 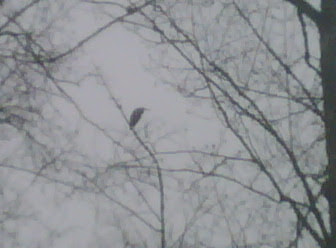 At first when I saw a white head flying I thought it was a bald Eagle then I realized it was a large Crane/Heron type bird.. We all stopped to look up and see 4 to 5 of these large swamp birds in the trees. WEIRD!! but super COOL! Maybe their feet were cold.. 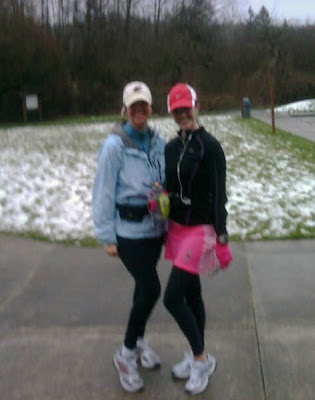 Speaking of cold we stopped at the flush potty along the trail and the bathroom was HEATED!! I wanted to stay in the potty, not the norm with the usual Honey Bucket routine. We used the pit stop for photo ops. Kerrie and Zoe above.. 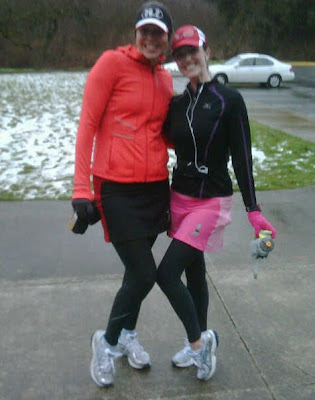 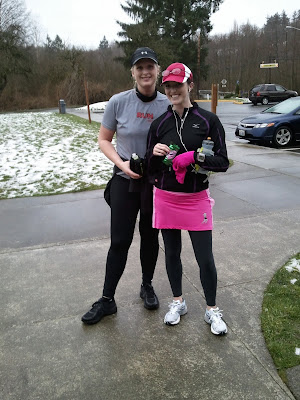 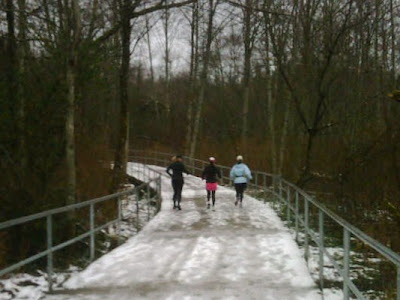 And off we went into the BRRR.. I had to stop and take this photo, it was too pretty!! I love it! We laughed about going 4 Abreast and 8 Aboob... and then going 2 Abreast when there were others on the trail.. It was super funny at the time :) 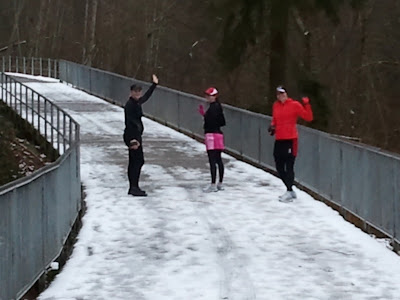 Later Kerrie took our picture, I stopped for fear I would fall. 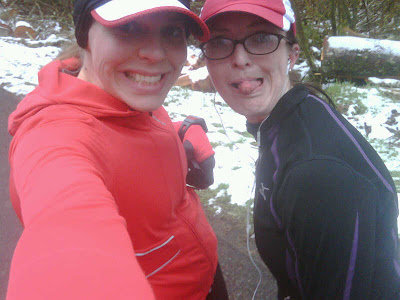 By the end we were getting a little delirious.. and SILLY!! But fun silly.. Amy passed her mileage PR at 9 miles and kept on moving. She is going to ROCK her first Half. We got to Hell Yes Hill and I could feel my heart rate RISING...Amy felt it too so we slowed.. but Kerrie and Zoe kept on moving Up Up Up... 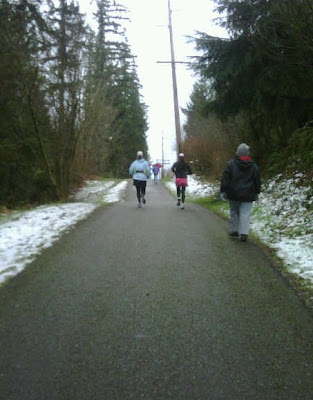 Folks it is much HARDER than it looks and when you already have 11 miles on your legs (or 29 in 2 days) it is TOUGH... But we made it and did laps around the parking lot to get to 12 miles.. 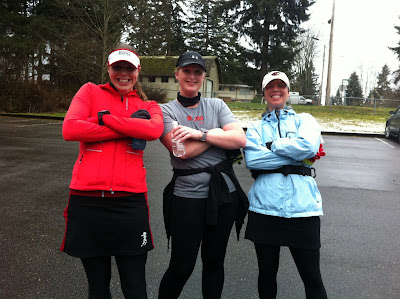 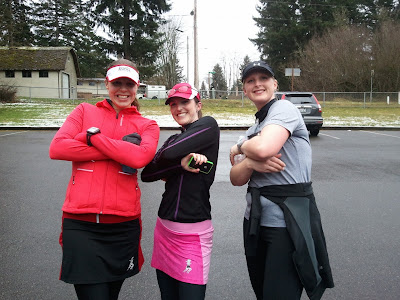 Love my girls :) What a fun recovery run.. After the Run Amy and I hit Starbucks for a non-fat Vanilla Carmel Latte to warm up...he truck heated seats were FANTASTIC!!

30 Miles for the weekend and less than 50 days to BOSTON!!!
Posted by Mel -Tall Mom on the Run at 7:45 AM
Email ThisBlogThis!Share to TwitterShare to FacebookShare to Pinterest

My weekend run was: refreshing!

Looks like you girls had a ton of fun out there! Aweosme job on some serious weekend mileage.

My weekend run was a celebration of my birthday. Hubby and I ran the 10 mile loop around beautiful Cades Cove, TN in the Great Smoky Mtns. It was a slow, hilly run but we were not going for time. We were enjoying each others company and the scenery on such a gorgeous day!

I love your recap and pics of your run! Way to go getting in those mega miles!

I had a tough running weekend too. Can't wait to meet you in Boston though!

my weekend was...interesting. i'm actually kind of glad it's monday! great job on the running. it's interesting that all those runs were so different. i love that picture of how you were feeling during the hard run.

My weekend run was TNTastic! Ran with the team Saturday and Sunday. Love the photo of your 'Hard' run, keep it and look back at that run when you're feeling bad.

You guys were brave to head out in the snow.
Snow was gone here, but it was cold and BREEZY...brrr.

I had a great weekend - two TNT group workouts and ran my longest mileage in 18 months Pain FREE. WOOT!

My weekend run was... painful. Two words, "shin splints." Still working through them (again), but I beared it Saturday and ran over 4 miles anyways (do as I say, not as I do).

I can't wait 'till I'm up to 30 miles in a weekend. You're going to kick Boston's arse!

My weekend run was amazing and inspiring! I paced my friend to his first sub 2 half marathon and hit 100 miles for the month. The sheer look of gratitude on his face as well as the one million times he said thank you totally made my weekend run awesome!

My weekend run was..rainy and I loved it!!

My weekend run was...well, you summed it up pretty well!

BTW: My Garmin reported Mile 12 as my fastest mile. What the...?

that is one busy weekend! I can't believe how much you ran. good job!

My weekend run was full of firsts.
It was my first run that was 100% off pavement. All of it was on a gravel trail. It was the first time I ran with company all the way through. Usually I go solo. I loved it! The first 6 miles were in snow and slush, the next 6 miles in ice-cold rain and the last 13 miles were on muddy, slushy ground.
Now I am a 2-time marathoner.

You and your recovery runs amaze me!!!! So much more fun with running buddies or Ryan reynolds! ha!! Crossing my fingers for better weather this weekend!!

My weekend run with the Fleet Feet group was character-building! We did the five-mile loop (2x for halfers, 3x for the full marathoners) at Point Defiance. Hills and ice are not a good combo. Felt like I ran miles on the side of the road, in the crunchy snow-gravel mix, where it felt safer. One guy slid/surfed down a long icy hill and I was praying I wouldn't have to take off my jacket to use as a bandage! But it was a beautiful morning and a great experience.

I am so jealous of your terrific crew of running buddies. There are days when some company would be so so nice...well done!

I hit 13K this weekend...longest to date.

great job on the runs...esp the hard one!! those are the ones that make us stronger.

My weekend run was great yet different. I ran 14 miles this weekend. Longest run since my move to Idaho. I felt a little weird cause I didn't know the entire area but I stayed on a trail that was busy with walkers, runners and bikers. Not that the streets of Tacoma, WA are super safe but I am used to those streets so to run 14 miles in unfamiliar territory was a little scary at first but I had a great time overall and looking foward to this weeks long run.

I love all the pictures you take on your run!
I have a clothing question for you. Do you get the skirts without the compression shorts from RunningSkirts.com and then wear your own tights or do the skirts come with the tights/capri's?

my weekend run was: MAGICAL in Disney World!

my weekend run was: MAGICAL in Disney World!

unfortunately, my run this weekend was painful. stoopid knee

isn't it nuts how a run one day can just suck and then the next be fantastic? well done my friend. and YAY for that boston marathon being so close. very exciting.


It's truly very complex in this busy life to listen news on Television, therefore I simply use web for that reason, and obtain the newest news. apple itunes login