This weekend was BEAUTIFUL in the PNW (Pacific North West), sunny but COLD...well for this Tall Mom anyway. I was not sure how my hamstring would feel for the Long Run so mentally I planned for 15-19 miles... I Googled Hamstring injuries and based on what I read it said that running can actually help stretch the muscles... Go Figure!!

I met up with Tammy, Heidi, the Fleet Feeters and Team in Training folks... the trail was BUZZING.. LOVED IT!! From the first step something felt different, a very very good different. I had energy, my legs were pumping, it was effortless :) I have been waiting for a GREAT Long Run, FINALLY!! I knew that I was in for 20 miles with Tammy. Poor Heidi was not feeling well but she hung in there.

We made the turn for the first out and back and realized that the Fleet Feet coach did not mark the 14 mile turnaround for his peeps... UGH!!! As a Mom I want to take care of everyone so when we saw the first lady with no Garmin pass the turn I told her she could head back... I was on Garmin spotting mode after that... not fun to run 15 when you think you are going 14.

I tested the Green Apple PowerBar Gel HERE YUMMY and easy to swall0w, also had the PowerBar Energy blast chews HERE. At the last water stop I looked in the cooler and spotted some Dove Chocolate hearts from the previous week. Hmmmmm... I took a milk chocolate risk and it paid off... Tammy and I were in chocolate heaven for a mile. The candy melted between my teeth..

At mile 14 we decided to take the rock trail along the river BIG MISTAKE... By mile 14 the stabilizer muscles and feet are sore and I am at more of a shuffle.. not good with a rock path. OUCH OUCH OUCH. It was pretty but the view was not worth the pain, we saw a Man running with a girl about age 11 in a sports bra... It was cold? and she was young?? Not appropriate!!

We dropped Heidi at 16.3 and turned to Finish..

16.3 + 1.85= ? :>(
Doing math after mile 10 is TOUGH.. so we decided to turn at mile 18 and hope for the best. I saw some friends from High School and we waved at the Fleet Feeters. The last 2 miles were a bit tough but I had no doubt I could have run the full 26.2 that day. ENDORPHINS!!! Our run stopped at the local bakery where I got a croissant and chocolate milk, finally used that $$ in my pocket.. I did not have my camera.. BOO!! Funny the little boy behind me in line at the bakery tried to flip up my running skirt.. HEHEHE..

Miss Zoe HERE and I planned to run 11 miles... I was WORRIED to run that far after a 20 miler... but when I woke up and legs felt good I was in. I made a BIG mistake and did not check the weather report. The Tall Jeep said 23 degrees, WHAT?? Brrrr... I did not dress for that..

We FROZE the whole run....I joked that my legs felt good because I was literally icing the whole run. At one point there were icey sparkles on the ground, made me think of Edward on Twilight (for Steph and Shelly), I coined it the vampire run it was eeery that not many people were on the trail, the vampire could not find us because our blood was frozen ;) FYI it is OK to get a little goofy.. I may have been tired from the 20 because I don't remember much of the run.

Poor Zoe had sore feet and things on the trail kept sending shooting pains to her feet.. but she made it and got a new... 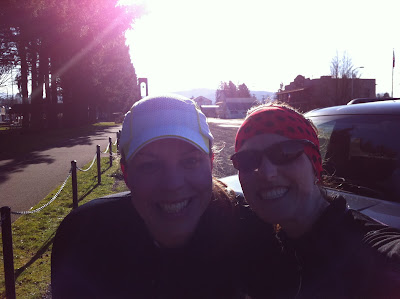 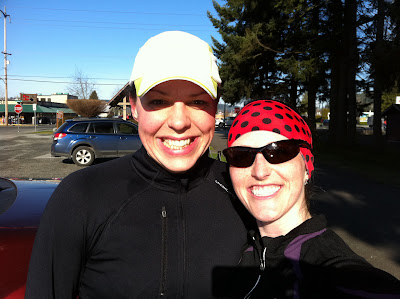 Take #2.. Much better Zoe told me not to squat down :) On the way home I saw Sam our Bald Eagle chasing a Seagull, Crazy Sam!!

HAPPY MONDAY!
Posted by Mel -Tall Mom on the Run at 7:51 AM
Email ThisBlogThis!Share to TwitterShare to FacebookShare to Pinterest

Jill@Run for the Hills said...

woohoo!! Great weekend, Mel! I enjoyed keeping up with your runs on DM. :)

so happy your body is feeling better! I totally thought your post said "31 smiles in 2 days". Not much difference I guess!

Great job on the runs!! Don't you love it when your body cooperates :) I can't wait for the warm weather to come!!

Wow Tall Mom, that is some serious miles! You rock. I hit the lovely Orting Flat on Friday for 10 miles, then again on Sunday for 7 miles. My family was not cooperating and did not want to wait for me at the park in Orting. The trail was busy!

Amazing running! You are going to be justtttt fine at Boston!

You are a rock star!

So...I saw something that made me think of your blog on my run yesterday... :)

You have so many running buddies!! I'm quite jealous! :) 31 miles in 2 days is pretty freaking amazing Mel--you were made for long runs! So glad to hear that hammy didn't bother you.

What a great long run! so jealous of the feeling. I need to have one of those soon.

Okay 20 and then 11. You were on fire this weekend. WooHOoo! I have been thinking the same thing when I see sparkles...vampires. (S'ghetti girl is not allowed to wear make up outside of the house but uses body glittering gels. She was all sparklely in the sun at the park. I giggled thinking of Edward. She didn't get the joke. ~ Someday she will.)

What an awesome running weekend for you! I hate weather trickery where it's all sunny and lovely and COLD. It doesn't seem fair.

Great job on your awesome mileage this weekend!! I am so glad to see you back and loving running! Keep it up girl!

Great weekend mileage!! You are so fortunate to have so many available running friends! Great Job!

Wow 31 miles. Thats is Awesome! So jealous you have so many running buddies. I need to run 10 on Sat if you'd like to join my in Texas. haha

31 miles in 2 days is awesomeness!!
It definetly is ok to get goofy on a run. Makes the miles go by faster. For my first half marathon our friends surprised us with some posters they made for us that were Twilight themed. They cut out pics of the vampires and put funny comments on it. It gave me that extra boost and I'm pretty sure other runners thought I was crazy for smiling towards the end of a half marathon

Other than watching my breathing rate, math is certainly a top contender for trying to figure out how hard I'm working. The higher the intensity, the lower my math skills get (and I LOVE math!).

So no way would I expect you to be doing that kind of math (simply addition) after 14+ miles! haha I would have done the same thing - overestimate and take a guess.

Glad to hear your legs are feeling well!

So glad you had such good runs!

Your math woes cracked me up! Last weekend on my 14 mile treadmill slog (ugh) I was texting with a friend to pass the time. The machine kept shutting me off after an hour, so at one point I asked, "What's 5.36 + 5.23? How much more to make 14?"

I had a great 14 mile trail run with some serious elevation gains on Sunday. Wonderful running weather here...temps around 60+ by the end of the run. :)

that is fabulous! Love the chocolate as energy, yum.

Pure AWESOMENESS. Boston will not be ready for you!

Sounds like a great weekend to me! 23F and sunny?! I'd kill for those temps around here!

I'm so glad your hammy is up to snuff again! Good run ~ missed you guys Sunday!

sounds like an awesome weekend!!! i totally want chocolate on my next long run!

congrats! you seriously rocked it! and don't you two ladies just look so beautiful!

You.Are.NUTS.
But I love it!
Awesome frozen run with you! Again, thanks for helping me achieve my PGPMR!