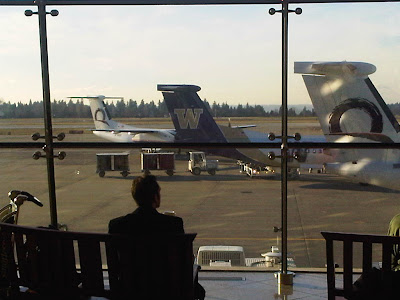 Looking out near the food court I saw the UW charter plane, made me think of Zoe and Kerrie's rivalry :) Had to snap a photo.. Then I got a Chilli and nuggets at Wendy's and People watched..

-Man clearly trying to change to a woman in VERY unfortunate shoes for airport walking.

-The poor folks whose flight to Palm Springs had been delayed

-Southwest trying HARD to find LaDonna Carnoodle via the loud speaker for her flight to Denver, she never showed.

-I got a FREE Santa picture, to be posted soon.

-Airports are like little malls, it was so hard to avoid shopping.

-I passed 5 Starbucks while at SeaTac.

On my flight the guy to my left was wearing brightly colored runners, so of course I asked him about his shoes.. Which lead to a GREAT conversation. Mason was gunning for a 2:55 in Vegas (he got a 2:59!!) and works for Nuun HERE. He passed on some free samples and ideas for flavor combinations, will tell you all about it soon. He has run several races, including Boston 3 times and is super speedy. He plans to run Eugene next year. It was nice to chat with a fellow runner.

Off the flight and Amanda would not arrive for a bit so I ate an Apple and hung out. I saw a billboard for Phantom of the Opera which was at our hotel the Venetian, I am a HUGE Phantom fan!! Amanda texted so I got up and waited at the bottom of an escalator...eventually a woman with a huge smile came up and asked "Are you waiting for Amanda?" It was her Aunt Jan, we hit it off right away..

We were standing at the wrong escalator, hehehhe.. Eventually we found her and headed to the Bellagio for the MOST AMAZING BUFFET EVER!! Huge thank you to Jan and Family!! We spent the night in their cozy home where their doberman Kaiser fell in love with me :) 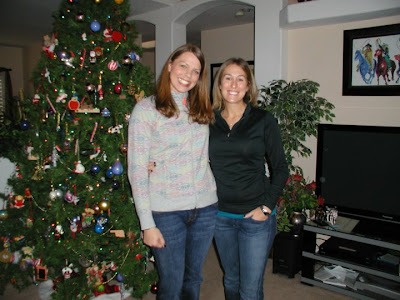 Then next day I broke an ornament playing ball with the Dogs (OOPS) we posed for a few photos then headed to our hotel. Thankfully we got checked in early I joked with the front desk about getting free Phantom tickets. Amanda has photos of our room AWESOME!! She found an envelope and GUESS WHAT?? Free Phantom tickets, SCORE!! We headed down to get our tickets then off to the expo. 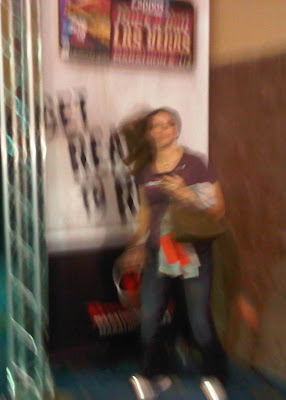 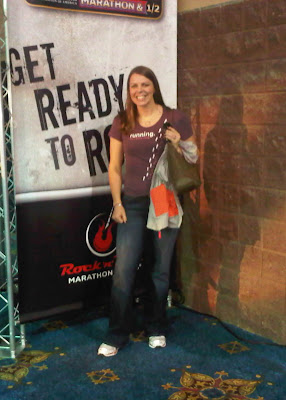 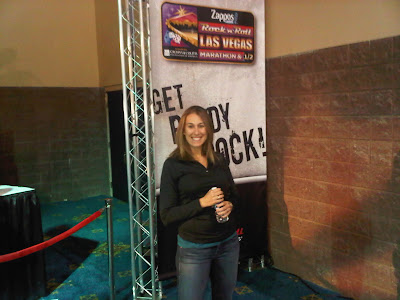 Amanda and I trying to stay hydrated. 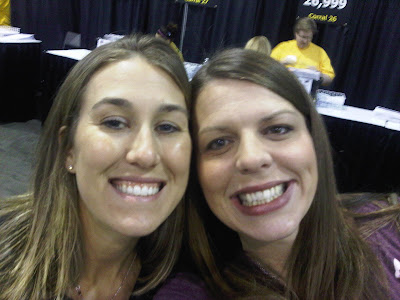 Her line was short, mine was LONG!! We opted to go with my Corral #9, we knew we would get passed but that was OK. 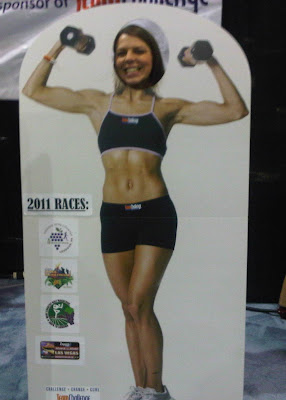 There were a few fun things along the way, and silly photo ops.. I WISH I looked like the above.. 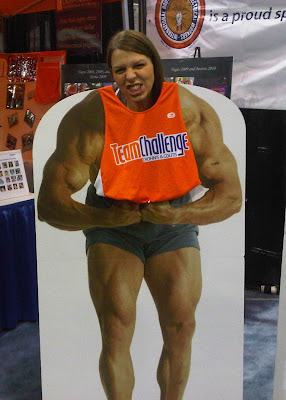 My Muscle Man imitation..we walked around once and didnt buy anything then settled in to listen to the "Experts" 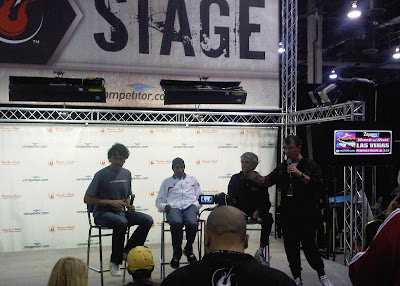 Scott Jurek HERE, Meb Keflezighi HERE and Frank Shorter HERE I am VERY PICKY when it comes to public speaking, the tough part about being a Communications major in college. Although I was not impressed with their speaking ability, it was nice to listen to athletes who set and reach their Goals. And to see running celebs is fun too.. 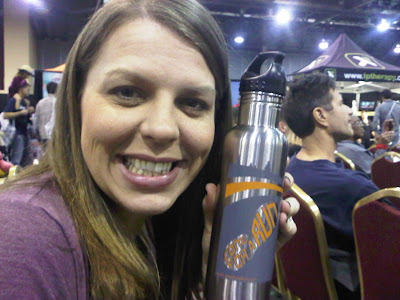 I brought my Gone For a Run HERE water bottle with me EVERYWHERE and filled up when needed. I love love love this bottle! We were expo'd out so we went back to the room to relax for a bit, then set out to Caesar's Palace to eat at the Cheesecake Factory. 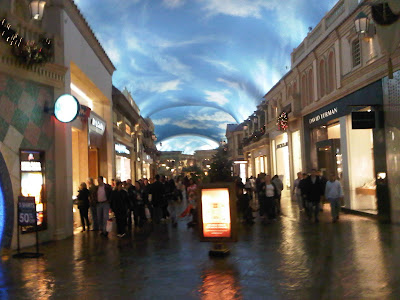 Caesar's Palace brings back GREAT family memories, we travelled often to Vegas for Basketball Tournaments growing up. Amanda and I had not been together since Dad died so I got a bit emotional at the Table. Our meal was amazing, although our sweat waitress was new and the ladies at the next table were very rude to her.. We swung by Nike then speedwalked to Phantom, FASHIONABLY late.. OOPS!!

WOW oh WOW was that a GREAT GREAT show. The theatre was designed specifically for Phantom so everything is amazing. I did not care for the leading lady, but overall it was FANTASTIC and FREE. Then we set out on a Dora-the-Explorer-esque journey to test the Monorail, Trams, etc.. to get to Manadalay Bay.. 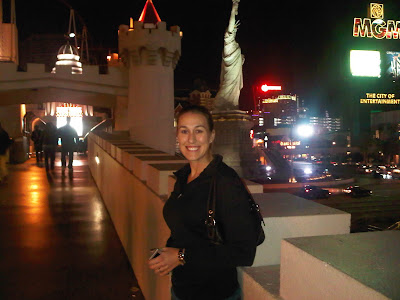 Amanda was getting TIRED it was later for her timezone..

JOURNEY:
-On the Monorail in Harrah's
-Lost in the MGM Casino trying to follow the signs
-Past the Jelly Bean Statue of Liberty at New York New York 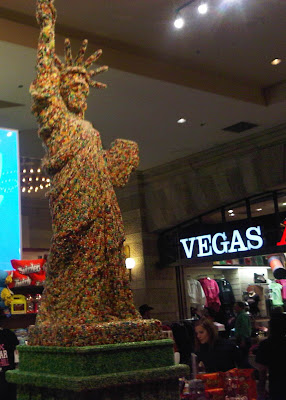 -Walk up the broken esculator at Excaliber
-On the Tram to Mandalay Bay
-Then WHERE??
TOTAL TIME: 1 hour and 15 minutes!!!

I swear we were lost inside Manadaly Bay FOREVER!! It totally sucked... We back tracked and figured we would follow the crowd in the morning. It helped me to sleep having a pretty good idea of how to get there. 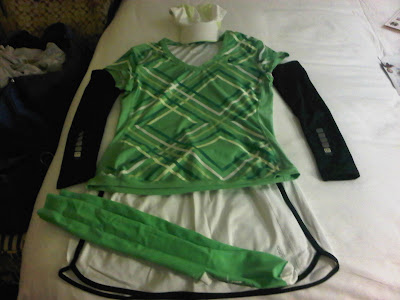 We set our our race gear.. the shirt I made to honor Dad was too big and scratchy, so I honored him by looking adorable :) Sugoi skirt HERE, The Recovery Sock HERE and Green Layer arm Sleeves..

HAPPY TUESDAY!!
Posted by Mel -Tall Mom on the Run at 7:07 AM
Email ThisBlogThis!Share to TwitterShare to FacebookShare to Pinterest

sounds like a blast! I give the outfit two thumbs up!

Cute outfit! :) And yay for free Phantom tickets! Sounds like the first part of the trip was exciting!

Looks like FUN so far!!! Lovin' the outfit... can't wait to see it in action!

Love the race outfit!
I have never been to Vegas but it looks like you had an amazing time. Might have to add that one to my bucket list!
Can't wait for the recap!

You are such an amazing story teller! I love your airport people-watching details!! ha!

Looks like a blast - minus the getting lost part - and I love that you're a communications major too!

LOVE the outfit! Sounds like pre-race festivities were a total blast!

Score on the free tickets!!!

Can't wait for the whole report. The Bellagio buffet is amazing. Awesome airport observations. I loved all of your pictures!!!

Such a delicious outfit! And you have some GOOOOD karma! Speedy checkin, meeting a Nuun rep, AND free show tickets?!! Nice!

Sounds like such an amazing adventure! Can't wait to read more! THe show tickets sounds sweet! Oh how I love Vegas!

Love the outfit - you always look cute in green ;) AND SCORE on the tickets! Couldn't have been given to better ladies ;)
Have a great week buddy!