Although I am not in Marathon training my local friends are, which means I can always hop in on a long run. Janna is recovering from an injury while training for Portland. We met early with friends Redhead Tammy, Boston Tammy, Coach Laurie(sp?) and her Dad, Janna and her buddy Rachelle. It was a large pack and they were setting a SPEEDY pace. Still feeling a bit tired from the Half on Monday I held back. Since I had not met Rachelle before I opted to slow and get to know her.

We chatted for a couple miles, she is very sweet and has two kiddos about the same ages as the Little Studs. We both were feeling a bit off so it was nice to slow. What an unexpected highlight to meet a new friend. She planned for 8 miles, at mile 4 Boston Tammy was on her way back so I left Rachelle with our FAST FAST friend. I could no longer see the pack so it was time to find my fast feet.

LORDY!! I was at 7:30 pace and felt like I was not gaining inches to catch up. I could see them in the distance then Janna, bless her, bent over to adjust her shoe and wait for me. LOVE HER!! Reunited we Gu'd and continued on our way. Always fun to catch up on the RUN. It was eventful so not to bore you I will recap bullet style: 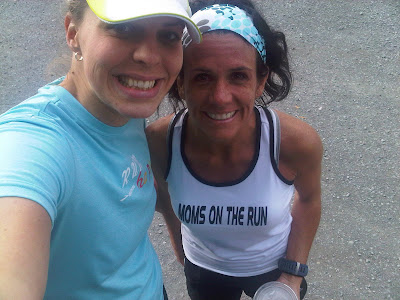 It was not pretty or easy, it was a total SLUGFEST, but we did it.. And how much do I love love Janna and her cute Tank Top.. 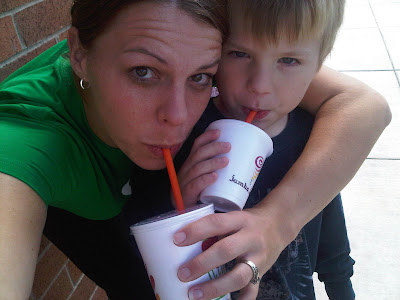 It took me a few hours to feel normal. After a shower, and lunch it was time to CLEAN. Little Stud#1 was tasked with cleaning the toys downstairs. He went above and beyond without even a fuss. He loves Jamba Juice smoothies so we set out for a little REWARD.. Fun for me too!! It is tough to drink and snap a photo of 2 people.. LOL! 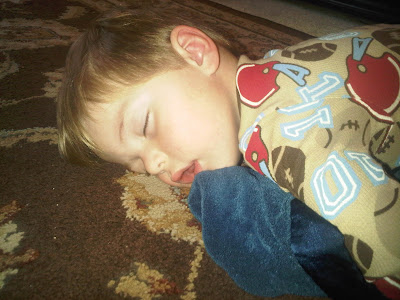 Little Stud #2 will be 3 in late January, he is fighting taking naps. We KNOW he still needs a mid-day rest. Above was taken last weekend...it was 3:00PM and he fell asleep on the floor. Hehehehehe...
Posted by Mel -Tall Mom on the Run at 7:56 AM
Email ThisBlogThis!Share to TwitterShare to FacebookShare to Pinterest

my weekend was kind of a slugfest in general. not too productive. hopefully that can change in the second half of today :)

luckily my running has not been a slugfest, although it was a few weeks ago so i feel you on that one! hope it turns around for you :) way to get it done though!

just ran a 30K and am now feeling a bit sluggish. have my compression socks on though and my legs are starting to feel better:)

Ran my first 15 miler this morning

It was tough,but I feel like being stuck on the treadmill made it a great "mental" training run.

I am pretty sure I still need a mid-day nap, but work won't let me. ;)

My weekend was good, I ran 22 miles for the very first time. I'm happy but also sore now :)

Your little one is soo cute sleeping on the floor :)

Good job on finishing the 16 miles!!!

Ran a 5K with my sister this morning, and had a blast, even though the course was a 1 mile loop, three times! this week calls for rest and short easy runs, and the Air Force Half on Saturday morning!

No slug fests for us this weekend, but i just found a new blogger person thru ur site! I saw that Rene ran a 30k and i know there r a hundred 30ksbut figured i'd check her blog to see and surely we ran the same one!! Yay, thanks for unofficially introducing us :-) now to get to a real computer soi can follow her...

Hi to all from a newbie to the club. Sat was a great 6.5 early morning run but my Sun 14 miles was less than stellar. For the first time in my 4 months of marathon training my body just felt tired. I had no desire to run another step.

Here's to another week :)

Slugs! You still rocked out a 16 miler though!
Can't wait to get back to that Orting trail with you and the Lioness. ;)

With our health issues, the weekend did go as planned so no long run for me. I wasn't up for a long run with the jogger so only my usual 6.5 each day was all I managed.

Ran back to back races this weekend...nothing long, but hilly as heck! I wish I could still take a midday nap...that would be amazing!

Great run but it doesn't sound much like a slugfest to me! My hubby and I ran together today and it was most definitely a slugfest, but it was purposely a slugfest! It was just so beautiful out and we wanted to enjoy our time together. 3.26 in 32 minutes.

Nice Run Tall Mom! I ran Saturday morning, six miles, potty issues the entire run! Worst run I have done yet. But I made it! : ) Can't wait for Portland.

Way to go on the 16! That is some serious mileage when you are NOT training for a marathon right now. Nice to have friends to get through it!

this weekend I had to skip my 5 mile race and no running now says doctor til we get some tests done... so i've just been laying around resting and really doing nothing but sleeping lol... but my boyfriend came over everyday this weekend and made dinner and we watched some tv so it was still an enjoyable weekend.

my 20 sure felt like a slugfest on friday. I would have loved to avg. 9/min. miles but it was 930 for me that day. Way to go on your run despite your tummy issues!

So very cool you finished strong for that 16 miler! You are a rockstar girlie ;)
And I LOVE the pic of you and your stud enjoying that smoothie!
Have a great week!