Half & Half Virtual Race Report

G HERE hosted a Virtual Half & Half Race this weekend. I had no idea which race to do. The 5K was appealing to my PR curiosity, but the Half Marathon had a better prize. What to do??? I decided to do both, it is my Virtual Race, so I did the GOOFY Half & Half :)

Friday the CHALLENGE:
I set out on my lunch hour to get the 5K done on the flat track I do my speedwork on. When I turned on my Garmin I knew I was in trouble as the Low Battery signal came on.. UGH!! HALF a battery. I hoped that Garmin would make it, so I set out for HALF a mile warm-up heading the the start line. My internal Race director said "Go" and I was Off! I felt STRONG but my new black tank kept riding up exposing HALF of my stomach. I tugged my Running Skirt capris up and the tank down.. URGH!! I was clipping along at .46 I looked down and Garmin had turned OFF! Imagine being in a race, the clock goes dead and all the mile markers disappear, all when you are on pace for a major PR! Needless to say I was HALF ready to cry. I finished my run at a slow pace and had to re plan my RACE strategy.. 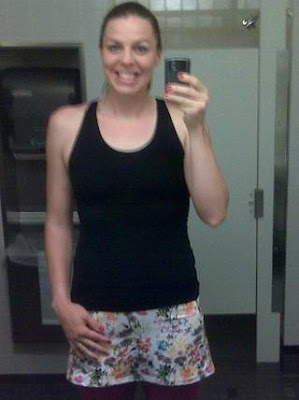 Will NEVER wear this combo again they do not play well together. 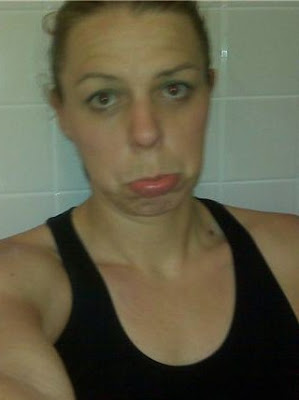 SAD!! I wanted to get the 5K done..
Since I had failed to register a 5K time on Friday I had to combine both races today. I am the Virtual Race Director and I say it is OK (Hope G agrees) I was PUMPED that Janna (Lioness) and Jen (Tan Jen or TJ) could meet me. 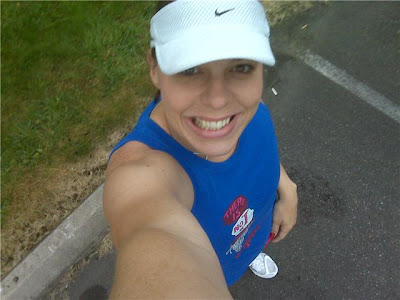 I felt a little OFF today, my Peanut butter toast was not sitting very well. I also had to carry my water because we would be out for so long. I normally would not carry water in a 5K. My plan was to warm-up with my buddies. Re-set my watch, run a FAST 5K and jog back to complete the Half Marathon with them.
As I set out I QUICKLY realized I had not gotten my Ipod set, so I fumbled as I sprinted, ROOKIE mistake here! I have been training for Marathons, not 5K's my breathing was labored and I felt like I did not know what to do with my arms. SPEED takes time to feel comfortable and there was NOTHING comfortable about this 5K. First Mile 6:37, classic Tall Mom Mistake, I went out WAY too fast!! I tried to slow it down a little then went way the opposite, pacing for a speed I am not used to is rough. My legs don't know how it feels. I also realized the course I picked was slightly uphill, FUN! Second Mile 7:03, darn it I was hoping for sub 7's for each mile. I was tired, fading, the last mile felt impossible, I just wanted to be running in the 8's, not sub 7's. I could tell I was slowing and my mind was totally out of it, I was burping up Peanut butter and felt nauseous. Third Mile 7:17, good thing I ran that first mile so fast because I could not get my legs under me. At this time in a RACE there are people in front of me to pick off and a Finish Line. I spotted a tree and called it my Finish. Last .1 7:14 pace.

To PR in a Virtual Race on the 4th day straight of running, PRETTY COOL!! I am thinking of doing a 5K up the road next week, I am excited to see what I can do on fresh legs. It will hurt, but hey it is over and done so QUICK!

I reset my watch, caught my breath and turned to find my buddies. I am hoping I won't be disqualified for combining the miles of both races, but after Friday it is what I had to do. Janna had said they would go SLOW, which would be perfect after a fast 5K. When I found the girls they were not going slow. About 8:40 pace and I STRUGGLED to keep up. I let them talk and settled in just behind. There were several runners on the trail including some Fleet Feet training groups. I LOVE TRAINING GROUPS!! The Fleet Feet Marathon training was how I connected with the AMAZING women I ran with today. We cheered others on as we passed and tried to stay out of the way of the bikers. It was an overcast and misty day, the temp was in the 50's which is PERFECT for a long run. I had my GoLite Handheld, some Gu Chomps and the NEW Orange Burst Gu. MY stomach started to ache and I felt like I was getting a calf cramp, but I pushed the thoughts aside, I was too far from my car to let the pain in.

I was ZAPPED, did not care about pace, all I wanted to do was FINISH! The ladies planned to do 12, but were kind enough to add a mile for me. "I JUST WANT TO BE DONE!" I said. I am guessing that SPRINTING before running 9 more miles is not the wisest thing I have ever done. With my Garmin not matching theirs we ended with 13.4 miles and a GREAT run!

GREAT for a training run after a 5K. I have not put in this kind of miles since Seattle Rock N Roll Marathon. I am hoping to keep up the Long runs on the weekends to PR in a Half Marathon the next few months. 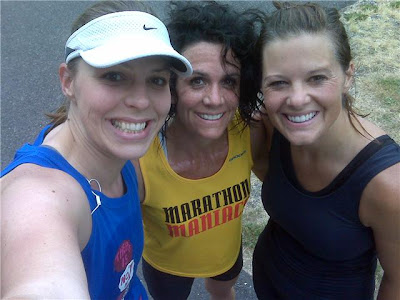 SPECIAL Thanks to my buddies for their support in this RACE..
Posted by Mel -Tall Mom on the Run at 1:23 PM
Email ThisBlogThis!Share to TwitterShare to FacebookShare to Pinterest

Great job! Just think how fast you'll be in a real race with runners around to push you.

I did the 5K, as the first part of my 5 miles today. Report coming.

The Garmin dying is the worst especially when you were feeling so good! Your 1/2 marathon time is dreamy, I hope I can run that fast when I grow up!

bummer about your Garmin yesterday, but great job today! Congrats! Sounds like a great day running and an awesome PR!

Hope you got to rest a little afterwards!

Bummer on the Garmin. I get all disappointed when things don't go as planned during my runs.

Good job on finishing the two races. Your pace is something I can only dream of. Have you always ran this fast?

I had pain in my knee today so I cross trained on the elliptical instead of running. i don't like doing that but figured with a 5k race coming up next weekend it was the best thing. Sigh.

Woah there, those are two AWESOME times for your virtual races. Congrats Mel!! :)

those are great runs but you are a crazy woman! a 5K AND a half marathon. Phew! Great job! Rest.

Great times. I'm super slow but excited about my first 5k in a few weeks.

Wow!!! Seriously you just fly!!! I wish I had you for my next half...you're an awesome motivator and I just need to get under 2 hours!

I hate it when there is a wardrobe malfunction...throws me all off! There is nothing worse than a riding shirt!

Good job on your virtual races!

wowowowowow you 5k was lightening!

Great job on the half marathon. I missed out of the half and half.

What is up Speedy? You can push yourself like no one I know, and you are good. What a killer combo! Maybe I don't ever want to run in the same race as you :) I am still SLOW!

as usual....awesome. I love how your training runs are wayyyyyy faster than even my races!

AWE MEL! You're so awesome & cute I can't even stand it!

Thanks for participating in the race(s). You are, in fact, the ONLY participant who attempted both races. Congratulations and Good for you for muscling through the awkwardness with the iPod. Results will be posted tomorrow or Weds at the latest!

I hate when my shirts ride up. I end up tucking them in to my skirt like a dork.

Woot!Woot! for a PR in a VIRTUAL race. Speedy McSpeederson... can't wait to see what you can do in a "reaL' race. Nice HM too!!!