It has been raining non-stop here so when the sun blared through our window I was SURPRISED. Could it be sunny?? The folks at Scape sent me sunscreen to test and it could not have come at a better time. Jon picked me up and we headed to the race start. The Green River Marathon HERE is FREE put on by amazing runner and race director Steve Barrick and volunteers. We arrived about an hour early and sat to stretch and people watch. There was a guy in aqua socks, one in loafers and a few funny characters, gotta love runners. There were two porta potties, one was a convertible, it had no roof.... LOL!! Jon was lucky to get that one.

Amanda texted me that she had arrived but we did not connect and the race started.. 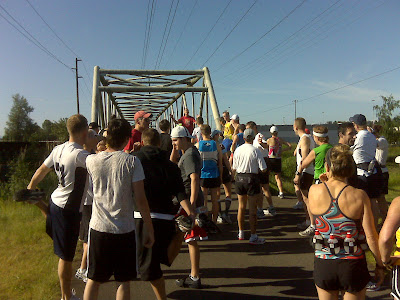 We all stood near the bridge and then Steve said "GO!" We went out 2 miles and back. I knew we would see Amanda on the way back. It is HARD to hold back when racers are zooming by, Jon was asking me about the pace, he NEEDS a Garmin. 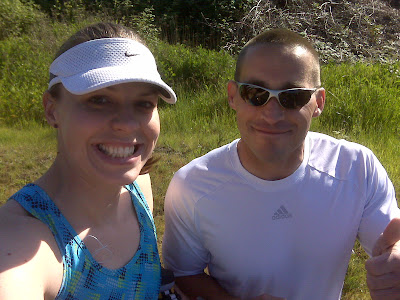 It is fun running with someone you dont know very well because you get to learn new things and see how they run the course and interact with other racers. With Mount Rainier in full view a CUTE couple asked what mountain it was... hmmmm... Jon thought they were kidding then continued to tell them the view from the TOP is GREAT! They laughed and said they would go climb after the Marathon.
Instead I zoomed ahead to find Jon. We approached the trail I run nearly every day and I said "This is where I do my speed work." I guess I said it loud because the guy in front of us said "Well go ahead then!" LOL this proceeded to a back and forth banter including talk of piggy back rides to the Finish, runners are funny. We settled in behind two guys, one I had seen at several races the other was wearing black gloves and arm sleeves. Mind you it was HOT!! I was annoyed being behind them so we went around.
We started to climb a small hill at mile 14 and I was done. Jon did his best to remind me that it was mental, he was a great positive coach, then he said "It could be that we ran 20 on Monday." Ding ding ding.....yes I was TIRED because I ran 20 miles on Monday... GRRRR!! What was I thinking?? I went to take a Gu and the water in my bottle made me need to pee. I told Jon to go ahead and went to the bushes.
I was in conservation mode, my phone in my pouch became HEAVY as in I kept thinking about picking it up and calling Muscle Man to pick me up. Negative Nancy was in full force and it was BLEAK!! Then I realized where I was. I had been to this place over and over.. My Dad worked at a warehouse along the harbor for 30 years and there it was right in front of me. For a few minutes I thought about when I was young visiting Dad and getting Popsicles, sitting on the forklift and being so excited for the trip. About the Summer that I worked as a receptionist and created a quote board that made the warehouse men smile. I felt young again, my tired body was transported and my feet felt light. It is my Dad's birthday tomorrow, HAPPY BIRTHDAY DADDY!!! 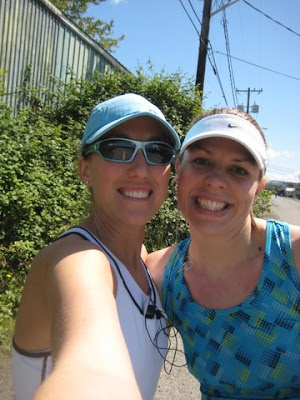 I cant tell you how happy I was to see Amanda!! I hoped that she would run the rest of the race with me....but alas she did not. I stopped for a quick hug and photo. I was so DONE!! But I had come too far to turn back. This photo tells the story of how I felt. 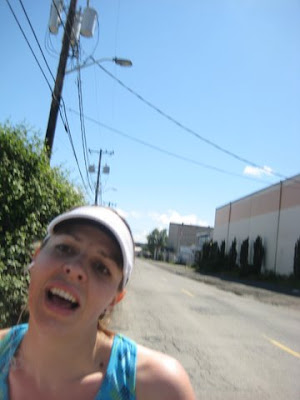 Yep, just breathe and keep moving!! I felt so alone, and HOT!! The water stop at mile 20 was out of cups so I refilled my bottle and drank Gatorade out of the jug. I thanked the volunteers and hobbled on. I could feel my toes filling with blisters and my shoulders were tense. There was a guy I had seen a few times along the way in a Halo headband. I think he was coaching 3 people or something because he would slow then speed up. We chatted as he passed by, he too was using it as a training run for Rock n Roll Seattle. I told him "I am usually much faster than this." He replied "That would make a good t-shirt." LOL!!
Mile 23 and Muscle Man drove by, I wanted to yell "PICK ME UP!!!" But I had come too far for that, giving in now would be a huge disappointment I was not injured, I was not cramping, I was simply tired and out of it mentally. I had no GOOD REASON to quit. A runner with a strong stride and dark hair was coming my way, could it be ZOE?? NOPE a Zoe mirage, BUMMER!! Funny the tricks the mind plays so deep in the race. Then Jill (at Running2Sanity) and Andrea drove past and yelled, I loved having so many people support me.
"Walk Melanie, Walk!!" My mind was telling me to talk, my body kept on moving. I passed Halo headband guy and the man in blue he was coaching, I could hear him say "It is OK just keep going." The last few miles were ROUGH and I was reminded AGAIN that I really am not a long distance runner. Eugene was different, I had prepared mentally and physically for months and was 333% focuses the entire race. I had made a FATAL MISTAKE again, I underestimated the distance and did not prepare mentally or physically. The Marathon is no easy task!! 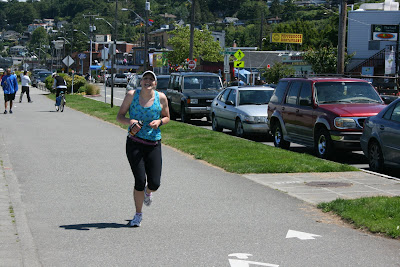 FINALLY there they were, my FANS.. I could see Spud's but I could not see the FINISH LINE. I had passed 26.2, then remembered the loop to get Amanda. I was an ULTRAMARATHONER, hehehehe!! 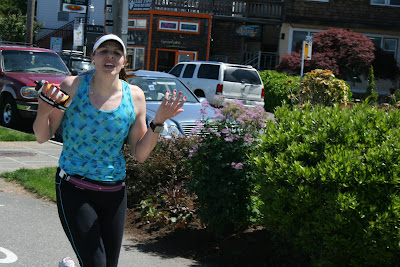 "Where is the Finish Line??" A Makeshift finish line with chairs was up ahead, they read my number on my leg and recorded my time 4:06:24, I am very proud of that time on such a ROUGH and hot day! I quickly saw Jon chatting with another runner he had finished . Then found Muscle Man, the little studs and Jill and her crew. I sat to take my shoes off, my feet were on FIRE, I was not used to the hot pavement. I wanted so badly to dip my legs in the water at Alki but the beach seemed so far away. Jon went to soak his legs he had dodged to avoid a husky dog on the trail and tweaked his knee, he finished under 4:00 hours. I sat too out of it to move.....and Jill, my angel, offered to go to Tully's to get me a milkshake. 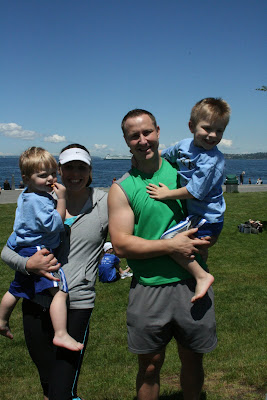 Family photo, lifting Little Stud #2 was TOUGH. It is so AWESOME to have my family together at the Finish Line and I know the boys had a fun day. 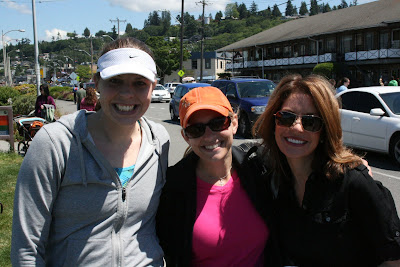 And here is my pretty cheering section!! We talked about BOSTON and them coming to cheer for me there too.. That would be a BLAST! I feel very blessed to have friends take them time to come see me Finish, it means so much to have the support and positive vibes :)
Posted by Mel -Tall Mom on the Run at 5:04 PM
Email ThisBlogThis!Share to TwitterShare to FacebookShare to Pinterest

Bummer it was such a rough day, but CONGRATS to you for another amazing accomplishment!! Call it a "character building" race. :-) Love the pics of you and all your boys at the finish.

Congratulations!! Great job on not quitting and finishing a tough race :)

Congrats on a great race!!

Congrats Mel!!! So proud of you. Yo totally keep me motivated and inspired. I always want to throw my shoes on and head out for a run after reading your posts. I CAN'T wait to meet you and our other bloggy friends in 3 weeks.

Thanks for the shout out for my Bondiband Giveaway :)

Congrats for pushing through the heat and physical/mental hardships to finish strong! You are awesome! :)

"i am usually much faster than this" haha DEFINITELY t-shirt material. awesome job powering through this race. you are soooo tough! :)

Congrats for sticking with it and finishing!

Way to push through a tough one! You're awesome!

Congrats on sticking with it. Yesterday was like 10 degrees warmer than it has been, that takes a toll...

You are a LONG DISTANCE RUNNER! 2 marathons in a month (with a 20 miler in between) and a third on the way ... Don't question it for a second. You are so strong and I am constantly motivated by you. Hugs!

Wow good for you pushing through like that! Love all the pics

Great job on your ultra!! Awesome race recap. You are inspiring!

I love the detail you remember! Congrats on #3 a challenge but completed (ultra) marathon! ;-)

When the going get tough the tough get going. Way to suck it up and stick it out. Awesome work.

congrats on pushing through and not giving up. the distance definitley isn't to be messed with or taken lightly. great job, mel!

Congrats for sticking with it in tough conditions and finishing your 3rd marathon!!! Great accomplishment!

Awesome job!! That's such a great time for a marathon. I could only DREAM to run my first Marathon that fast on Saturday.

Great job staying with it!! You should be proud, and tired! Have a great week!

Congratulations and great time! that is so awesome!!!
Katherine

Totally amazed you could get out there and do it so close to your PR race! I couldn't have attempted it, mentally or physically. You get the big high five this time!!

Sounds like a tough race but you pushed through and finished! Great job! Can't believe you ran a 20 miler and a marathon in the same week!!

You are SUCH a trooper, girl! To start suffering at mile 14 and push through another 12 is incredible. I totally recognize your pain and have felt that way before. In the end, I guess it is a good lesson learned! Seattle will be much better. :)

Great job battling through it!

those smaller races are tough! my first 2 marathons were Disney and Boston, 2 of the bigggest and best marathons in the world...my 3rd was a TINY marathon in the middle of winter on Cape Cod! it was lonely! you did a great job! congrats!

Funny how there are 26 comments right now :) Congrats!

Good job pushing through the tough miles and finishing. I can't believe you had also run a 20 mile run just a few days beforehand!

It was a hot day! I'm so proud of you! You finished #3!!!
I wish I could've come out to cheer. And the casino reminds me of "ROULETTE!"
hee hee

What a great race report! You have such an incredible attitude that i so inspiring! I would love to do a training run just with you just to have some of that rub off on me!

you are one crazy lady :) great job on your 3rd marathon!!! 26 miles is a LONNNNG way to go when you aren't really mentally into it. great job!

hey you've got No.3 in the books, so good for you! that's amazing!!

Congrats on trooping it out! Loved the recap!