This week the Little Studs and Muscle Man came down with runny noses and scratchy throats. I TRY to avoid catching the gunk...but I must have cuddled with the baby too much because on my way home Friday my throat was on FIRE and Muscle Man had major fatigue.. GREAT!!! WE went to be early hoping that a good night of rest would work miracles.

Lights out 9:05PM... During the course of the night, for various reasons, I saw EVERY HOUR. The baby was up at least 7 times....that child has a knack for pre-race nightly interruptions.. Eventually 6:45am chimed and I was UP! I had heard the rain pouring at 3, 4 and 5 AM, so I knew what we were in for.

Breakfast, Nuun and off to the Run Wild 5K at Northwest Trek. The In-Laws were in town for Muscle Man's 33rd Birthday so the kiddos were tucked in bed when we departed. The cars were piling in slowly to the Park and I realized this was going to be a BIG race.. COOL!!

Parked and snapped a picture...because we would not have a photog during our run.. 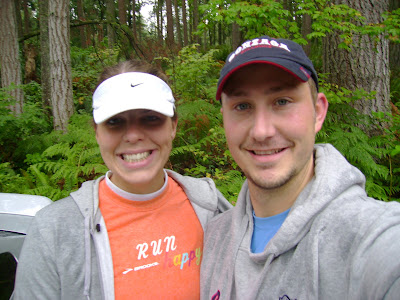 Got our race numbers 69 and 70..and waited in the Honey Bucket Line. My Garmin was not happy with the Clouds but eventually found a signal when I rested it on a stump. Muscle Man was feeling faint and I told him he did not have to run. He toughed it out. TIRED, SICK and in the RAIN...the odds were stacked against us.

At the start line, in the RAIN, I noticed the 65 (now 66) year old woman who I barely beat at the 10K last month..Hmmmm... We were near the front, had our chips on and the horn blew. The plan was for Muscle Man to try to keep up. I weaved around a few runners and before I knew it I had lost him.... SORRY HONEY!!

Mile 1 I felt strong I told myself not to go out too fast and I knew the mile would be flat, out and back where we drove in. I could see 3 females ahead of me, one took the 8K path, I passed the second, but the 3rd was about 100yards ahead. I sped up!! We turned and headed back toward the park. I saw Muscle Man and he said "She is about 100 yard in front of you." I said "I know!" Seeing him was the highlight of my race because I knew he was there for me 333%. Mile 1- 6:58.

Mile 2 and my head was playing games with me. Since I hoped Muscle Man would be with me I left my Ipod in the car and was forced to listen to my breathing...SUCKY!! Through the beautiful overgrown green forrest, getting pelted by rain drops, Washington at it's finest! I could tell I was slowing a bit. Mile 2- 7:02.

Finally the park, that meant the finish was not far away. I had lost Female #1, no sign of her, I was internally settling for second. I got passed by a man maybe in his 60's in a bright orange shirt. I vowed not to get passed by anyone else and sped up. The park is filled with amazing Northwest Animals, Cougars, Bears, Coyotes, did I look at the animals while running? NOPE!! I looked at Garmin, and he was not behaving...I was not running 10:35 pace!!! UGH!!

Tired as I rounded the switchback downhills, this is treacherous for a 6'0 oaf...so I slowed careful not to slip on the wet concrete and break my head open. There were several wonderful race volunteers along the way.. THANK YOU!! A very welcome distraction. I could not get the negative thoughts out of my head, "Slow Down this hurts, Slow Down you have a side ache, Slow Down why are you doing this?" It was all I could do to silence the STUPID inner IDIOT!!

I cut off my chip, and stood waiting for Muscle Man. The orange shirt guy said "You Inspired me the whole way." I am not sure what that meant, but I took it as a compliment. I thanked a few volunteers and cheered for the runners. Here comes Muscle Man Chip Time 25:59 . I was so proud of him for fighting through the sickness and finishing his first 5K....For me!! 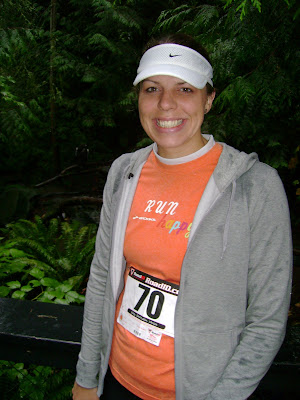 We went back to the car to get our sweatshirts, I was FREEZING!! We also got the camera. To left just above my should is an Eagle...probably can't see it. 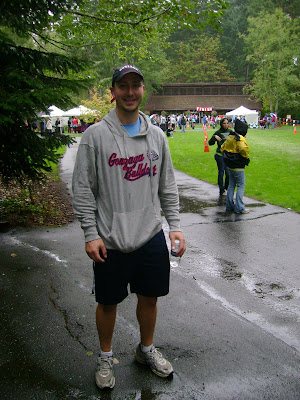 Muscle Man happy to be done running and sporting Gonzaga gear. He said his favorite part was the beautiful scenery, the finish line and that he was 33rd overall on his 33rd birthday. He wishes he would have had the energy to stay with me. Next time Honey!! 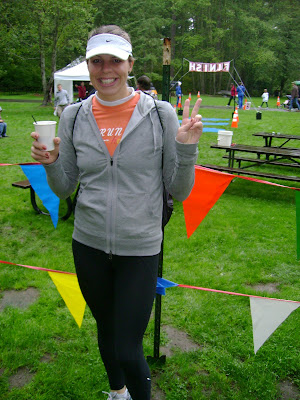 There was Water, Bananas, oranges and COFFEE!! Hello Coffee, Yes please. I took 2nd overall for Females, hence the #2 or peace sign pose. 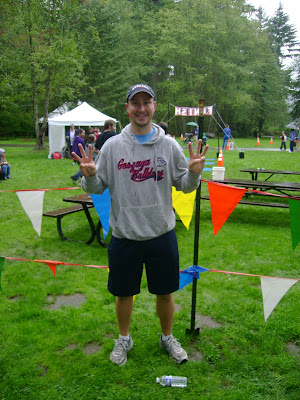 Hubby sporting the 33. It was wet!! There were puddles and mud everywhere. I had brought dry shoes, socks and clothes but decided not to change... DUMB!! I froze while they passed out the awards and 50 door prizes... Yes 50!! Crazy. We didn't win anything...BUMMER. 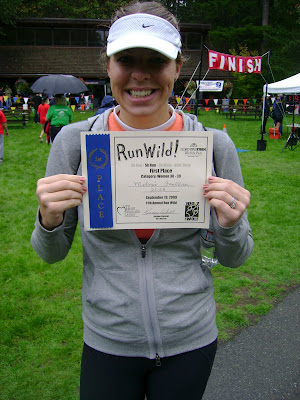 Blue Ribbons 2 weeks in a row, makes a Tall Mom Smile :) The woman who beat me was 41, so I took 1st for my age group!! They passed out the Age group certificates ahead of time and then handed out the prizes for the top 3 overall.. We saw Mary, aka #1 Female, on our way to the car and I congratulated her...her time was 20:16...she said she was hoping for a sub 20 but thought it was a tough course with the tight turns, rain and the hill near the finish. 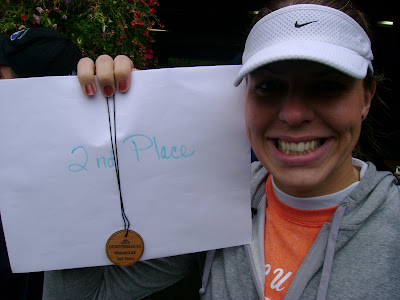 Spotlight on Tall Mom. I won an ADORABLE wood medal, and passes to several local attractions. They gave out Fleet Feet gift cards for $50 as door prizes...I wish the winners would have won that..
Time- 21:54
Pace- 7:02
(Missed my A Goal by a few seconds)
Age Group- 1/43
Gender- 2/137
Overall Place- 17/223
Posted by Mel -Tall Mom on the Run at 7:02 AM
Email ThisBlogThis!Share to TwitterShare to FacebookShare to Pinterest

Congrats on running a great race. How lucky you are to have MM running with you.

Congrats girl and WOO HOO ON THE PR!!!! Gotta luv it! Happy Bday to the Hubby!!!

COngratulations on a new PR!!

Awesome job! You and the Muscle Man are an inspiring team!

Congrats on an awesome time and winning your age group! You rock!

I'm in AWE!! Your a machine girl and I want to be just like you when I grow up :)
Seriously those are some awesome numbers- you rocked that race!
xoxo

You are Fast, Fast, Fast! Tips on how to get that way??? Good work!

Congratulations on your PR! Way to go!!

HAHA! Mine does that all the time, but usually in the opposite direction...i'll be running along at a leisurely pace and it tells me i'm running a 5:35. HA!

CONGRATS on the PR and 2nd place! You rock speedy mama!!

I'll have to look into the races you mentioned! I would love to hit up some runs with you. Maybe one of these week days I could meet up with you on a lunch hour run? Let's figure something out!!!

Great job on the 5k! Those older women can be fast!

Wow! Congrats - that's a wonderful accomplishment! So motivating. I do believe I'm going on my first run tomorrow - you are definitely part of the inspiration!

Congrats on the PR! That's awesome! Great job by you and Muscle Man!

Wooohooo! I can't wait to run this one with you next year:) Great job to you both!!!

LOVED this report. I was on the enge of my seat (errr, laptop) the whole time. BIG HUGE GIGANTIC CONGRATULATIONS! You did SOOO well. I don't even have to qualify that by saying "on a hard course in the rain when you weren't feeling well" because serioisly, smoking fast 5K and 2nd overall female! NICE!! You rock, lady! So proud of you!

oh bummer i hate when the door prizes are better than the place prizes- damnit you EARNED it! lol!!!

i would interpret that man's comment as you kept him going, faster than he would've gone otherwise:) a good deed, indeed! :)

1st in your age group?! 2nd woman?! 13th overall! Mello you're a machine! Well done! And well done to Muscle Man for his stellar time in spite of a cold!

Congratulations! Your training really came through for you this summer. I am so mad at my Garmin from yesterday, way to listen to your heart and not your silly mind!

Fantastic job! Even without the lousy conditions you guys were running in (illness, rain, etc.), you both had finishes worth being sooo proud of!

Mel, I said it on FB and I'll say it again here. You. Are. Awesome. Congrats to you and your hubby!!

Awesome job!! If I was awake that much and heard the rain, I might have just shut off the alarm clock and stayed in bed!

When I ran my 3rd half marathon 8 yrs ago, I have been up ALL night, no joke, with my sick little girl. I went to the race and ran my fastest half time ever. 1:35... YAY.

You are a ROCK STAR!! That time is something else! Tell Muscle Man congrats, b/c that's great he even ran, feeling like that! Yuck.

We're having water rationing here right now, so I'm feeling a little wistful about the rain you're having there!

Congratulations on the PR!

Excellent job on your PR. And to top it off it was raining and you didn't get much sleep. To break 22 is so awesome and one day I hope to do the same.

Awesome job! Way to PR on little sleep and a cold.

You are one speedy Tall Mom!! You you should be soooo proud!! Great job on the PR and 1st in age group!!

Yay, congratulations on the PR and 2nd overall/age group win!!!

Great job! Way to PR when not feeling your best!

wooo hoo congrats mel. you are amazing! i'm so behind on blogs, i have lots to catch up on! but congrats, so proud of you, you're an ispiration!!

you are just getting age group awards and PRs left and right! you are amazing :) congrats on another great race and a PR!!!

Great job Mel and Muscle Man! I have been trying to read blogs all wk, and got up EXTRA early today to find out HOW your race went..wow! I read w/ the excitement & anticipation of a good novel! Congrats to BOTH of you, and hope the entire family unit is feeling better soon. chicken soup, oj, rest...

Thanks for putting an effort to publish this information and for sharing this with us.

Glad to visit this page, I found good stuffs here and I really enjoyed reading them. Thanks to a friend of who shared this page.

Love it! Very interesting topics, I hope the incoming comments and suggestion are equally positive. Thank you for sharing this information that is actually helpful.

I really enjoyed reading your article. I found this as an informative and interesting post, so i think it is very useful and knowledgeable. I would like to thank you for the effort you have made in writing this article.

Thanks For Sharing Information