The night before the Race Muscle man packed the food, water and supplies we would need for us and the little studs. He is VERY organized. When we woke at 7am we had little to do but put on our gear and drive to Bonney Lake. Never been to Bonney Lake?? Well let me give you a quick introduction.

We arrived at the Elementary school, I got in line to pay the $10 each entry fee and pick up our shirts. The line went quickly and I found Dave in the playground with the kids. We stretched and looked at the course map. The man with the bull-horn informed us that the course had changed, we would be going through residential areas, past each of the lakes and over "Rolling Hills." OF COURSE HILLS! Can I get a race without hills? Pretty Please?

I knew the area well enough to imagine what we had ahead. "Not an easy stroller Course" we were told at mile 3.5, I knew that before we set out. While in line for the single Honey Bucket the girl in front of me was wondering about the course, nice Runner that I am, I handed her our map. We chatted for a bit. She was a fit looking beanpole in her 20's... FYI that curly haired rail thin girl in the booty shorts won the race. She told me in line her goal is to "Beat the girls with words on their butts." LOL.. There is NO WAY I WOULD HAVE WON. She ran a 34:01 or 6:48 pace....I struggle to get that pace running one mile on a flat track. Cheers to the 22 year old 130lbs (guessing) runner you rocked it!!

We got the kids strapped in with snacks and toys....no DVD player as we did not want to annoy people on the run with Dora blaring. The race started by looping around the Elementary school, RANDOM!! Once on the main road we were passing people on the left. The race began on a road that lines Lake Tapps and is one of my favorite places to run, so pretty!! On the first hill Muscle Man's shoe came untied....UGH Rookie double knot your shoes (LOL JK Honey). He stopped to tie the laces as I pushed up the hill. We rounded the corner and Blaine informed us that "We are on Grandma and Grandpa's road." Smart kid...too bad they were not home :( It if funny to run in the area I grew up...I LOVED IT!!

Reprieve from hills for less than 2 minutes and on to the next...The Double Jogger is TOUGH to push up hills, as I have said our kids combined weigh around 75lbs. What I have not mentioned is that it is HARD to slow down that weight when going DOWN. Up Slow, FAST down... UP Slow, FAST Down... We were annoying to the few people we kept trading places with. Once we reached the BIGGEST HILL on the course hubby was ready to catch his breath. We completed the first hilly mile in 8:03....but the course continued to be TOUGH!

We made it over the BIG hill only to face her little brothers and sisters the rest of the race. The leader passed on the right as we ran past the 2.5 mile marker.. I tried to focus on the beauty of the city and make sure to keep hubby going, this was his first 5 miler and first ever race. He breathlessly told me "Run ahead Honey, I will catch up later," No way, we were in this as a family!! We passed the sole water station and people cheered for us. I heard an older man say "The family that runs together gets tired together," Deep??

I recognized one of the Fleet Feet employees just behind us. As we went up the next hill she told us "You are an inspiration." I LOVE hearing that!! Gave me the push I needed to heave the stroller up the next incline. This portion of the course was great because it is a one-way-road around Bonney Lake, very pretty and not too many cars. The boys were amazing, Blaine talked a little about the people and trees and Easton was entertained with new scenery. We only had to stop once to reload with Cheerios.

When we stopped I noticed a man just behind us, he was always about 200 yards back.. As we passed the 4 mile mark I said "Our goal is to beat that guy." Not sure hubby cared about anything but finishing at that point. The course ended inside Allen York park on a Wood chip path...TOUGH to push the stroller. I am barely strong enough to turn the huge thing, not sure how Muscle Man did it. Our camera went dead or I would have taken a picture. STRANGE place to end a race. Down a very steep hill and we could see people in the distance. Hubs pushed ahead and we realized it was the FINISH LINE!! The Bull Horn man said "First in the Stroller Division." There was only one other person pushing a stroller and she was WALKING..LOL, I will take it!

We were done #48 and #49, followed 3 seconds later by "The guy I wanted to beat." We grabbed a water, unstrapped the boys and were standing near the Finish Line...when guy we beat came up.. He said "I have been trying to pass your guys for the last mile." AWESOME!! He had a great attitude and gave us a high five and a congrats. I told him it was only the second time that hubs had ever run 5 miles. He said "I had a hard time and I was not pushing that HUGE thing." I Love people who are willing to give props to others.

All in all it was a GREAT race. People cheered for us and I was proud to cross the finish Line with my family, maybe we will PR next year....because we will get a babysitter...LOL 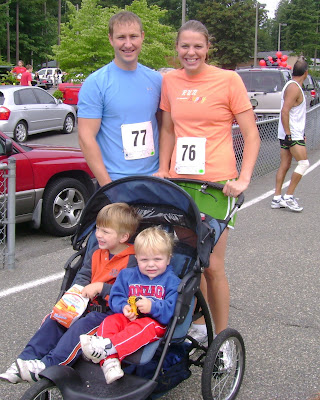 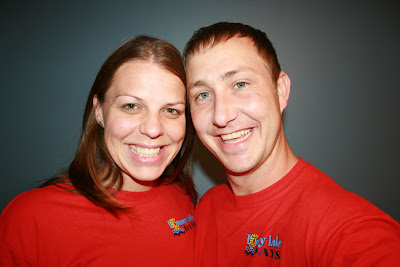 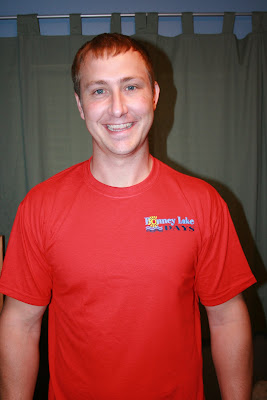 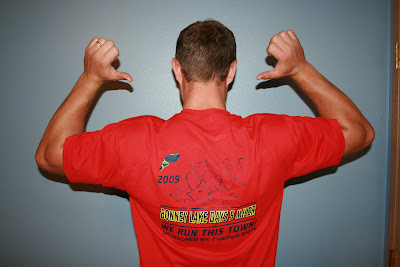 Cool Shirt for a $10 entry fee 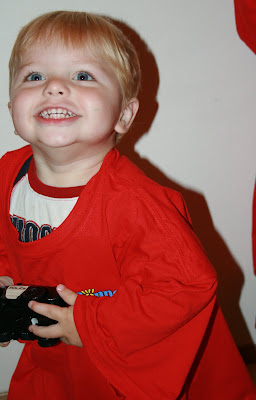 He "Ran" too, so we had him try on our shirts 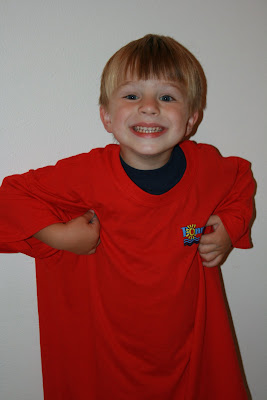 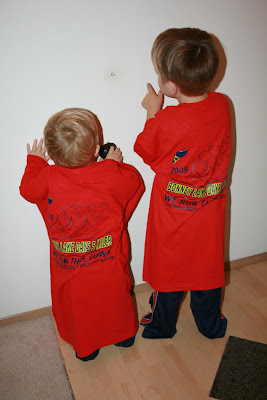 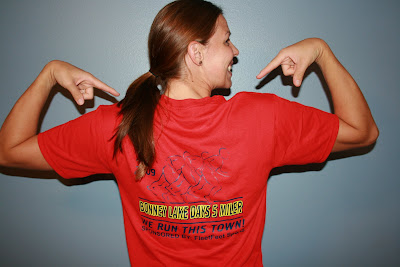 Yeah Baby!! Hills while pushing a stroller and I was not even winded at the end.. 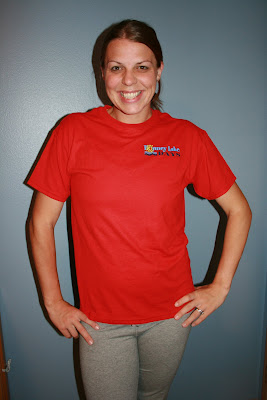 Tall Mom Loves FUN RUNS!! Once down and many to go.. FYI I found a GREAT route for hill training for my next Marathon...WOW!!!
Posted by Mel -Tall Mom on the Run at 1:00 PM
Email ThisBlogThis!Share to TwitterShare to FacebookShare to Pinterest

WAY TO GO :) And oh my goodness, your whole family is adorable :)

Love the pictures too. ;)

How completely FUN!! Sounds like a tough course. Congrats to hubby on his first race.

love the pics of the boys in the shirts! Fun family time! yay!

Woohoo, congrats to Tall Mom & Family! :) Sounds like a great event and you guys were working hard. Special congrats to Muscle Man!

Awesome recap! Sounds rough! Your time was great! Running with a stroller is seriously HARD! I have noticed that my son loves races! I never had any problems pushing him in a race, as far as him getting bored and cranky. He would even point out the people I should pass, "Get THAT guy mom!" Or "why are we going so slow Mom?" ouch! ;)

And they got first in the stroller division! YAY! When I run with the hubs he pushes and he is uber competitive. His thing is that he will stick with me until another stroller passes, then he is off. Pretty cute!

I guess I will have to watch for this run next summer!

Oh and yeah, I am planning on taking my son up to run the 1K at Snoqualmie! I'm going to make it his big race day! Let's find each other there!

Hey to answer your question - I would say you are ok to read the book first or see the movie first. I think that it wont spoil it for you because the book has a few things different but actually i think they did a pretty good job although i read the book about 4 summers ago.

Awesome! Well, that answered my question about Bonney Lake =). It's hilly =).

Way to go on first place stroller division---I think it speaks volumes that you were pushing a stroller and you beat non-stroller peeps! In fact, 9:18 pace would totally beat me =)!

you guys are absolutely ADORABLE! congrats on a fantastic race!!

good for you guys, mad props! what great things you and your husband are doing for your kiddos! inspiration indeed.

you guys are just adorable!! congrats on such a fun run :)