Run with me in BC

Rare but this evening there were no planned events for the conference I am supporting for work in B.C. A bunch of people planned to go out and have drinks. I, on the other hand, had a different idea of the PERFECT evening. Yes folks I laced up my Asics and hit the Seawall path for a quick 8 miler. I thought you all would enjoy running with me in B.C. so I brought along my camera and risked my speedy time to stop and snap a few photos.

I did a little warm-up walk. I know me warm-up?? Ummm well the truth is I was being lazy and decided to start after the 3 flights of stairs…LOL. I set off in the busiest part of the path. There were people to dodge everywhere. I imagined myself in my marathon race surrounded by 25,000 other runners and practiced my weaving techniques. I do not claim to be graceful but I can weave witht he best of them.

The first mile was strictly people watching and SO FUN!! Here are the list of characters: Two adorable girls wearing matching pink hats, in a double stroller, eating ice cream, followed by a panting Bulldog who would have loved to be pushed and probably loved the ice cream. A couple pinned up against the fence, I think he was checking her tonsils for something? A groups of 6 people eating on the balcony of a small house boat in the Marina, the balcony fit exactly 6 people. I could go on…but instead of boring you with my rambles lets get to the pictures… 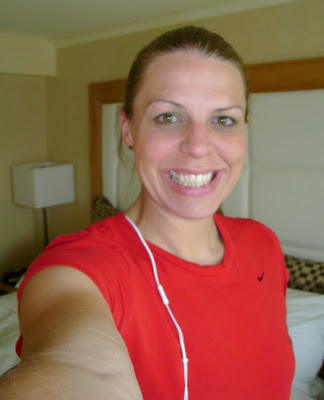 Self Portrait all smiles in my hotel room before the run. 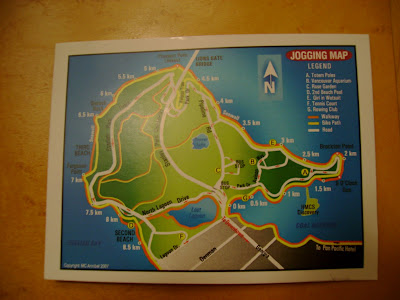 The adorable jogging map the concierge gave me. I am going to use it as a bookmark. 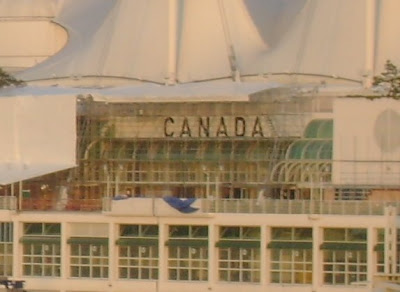 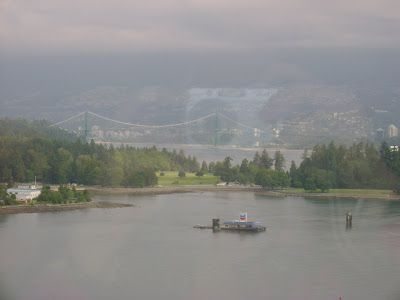 The view from my hotel room of the Seawall path, sorry I am in the photo.. 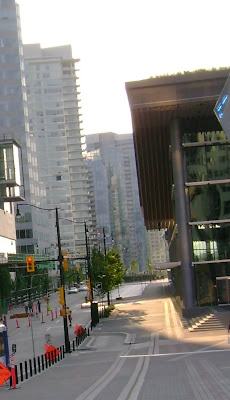 My warm up walk past the convention center, much of the city is under construction in preparation for the Winter Olympics. 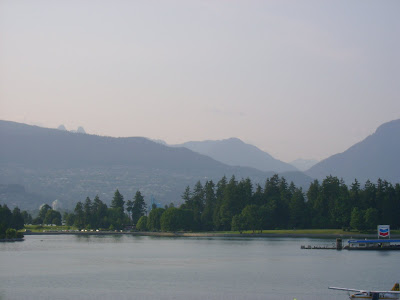 View from the top of the stairs, I think that floating Chevron station is adorable. It is lit up at night, but I can't get a good picture. OK I am easily amused. 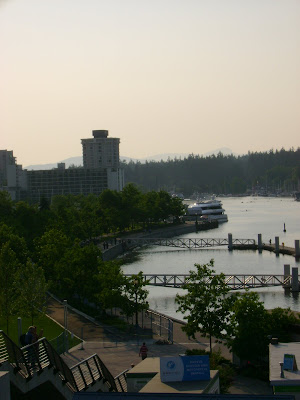 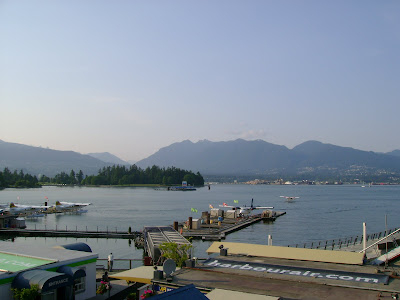 The Sea Planes, you don't see that every day....well unless you fly them.. 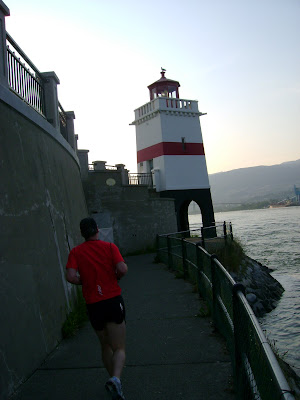 I didn't take many photos on the first part of my run because I was weaving past people and racing a group...they were all lined up and started just after I passed. Again this was great training for the Marathon. I could see the shadows, I could hear their footsteps, I had to practice looking over my shoulder to pass, speeding up and slowing down as needed. I was pretty cool, eventually I got passed by a few runners, but only by men. I LOVE lighthouses so running under a little one was a treat. Note the man who passed me as I stopped to snap the photo. 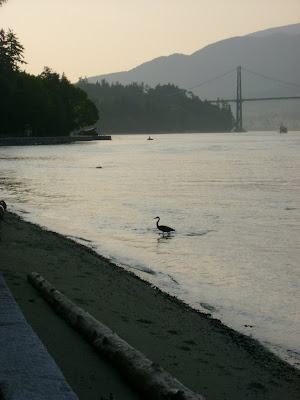 The Crane was eating dinner I felt bad interrupting but thought it was a neat shot with the bridge in the background. 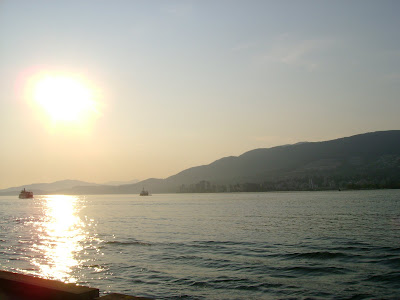 The photo does not capture the beauty of the sun reflecting off the water, it was breathtaking. 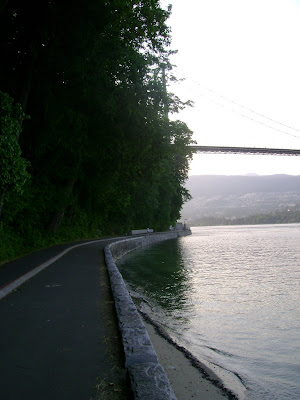 I was hoping for sub 8 minute miles so I was pushing myself. As times I felt just a tad light headed and imagined wavering and falling off the wall into the water. I wonder if that has ever happened ? 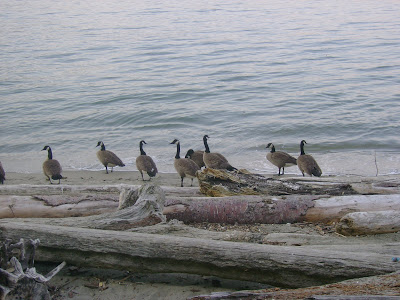 Can't go to Canada without taking a photo of Canadian Geese... We have these all over in Seattle, but I still thought it was cool, later I saw a group of baby Goslings. 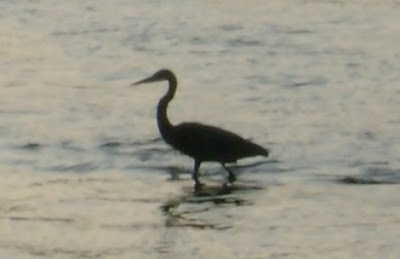 My friend the Crane was still there on the return trip 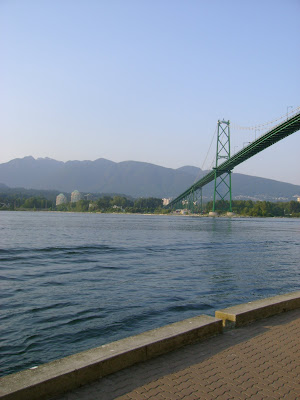 The Bridge in the DISTANCE of the photos taken from my hotel...that is where I turned around. Amazing when you can see the entire distance of your run, really puts things into perspective and makes you realize what you have accomplished. 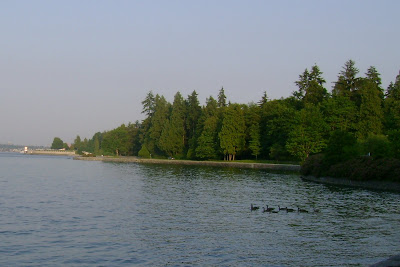 My Geese friends chose to cool off. This section was just before a large fragrant flower bush that nearly knocked me out, deep breaths and potent floral do not mix. 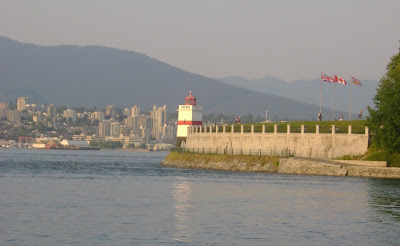 The Lighthouse with the upper viewing deck and the city.. Money shot...LOL At this point I had about 3 miles left and still felt really strong. 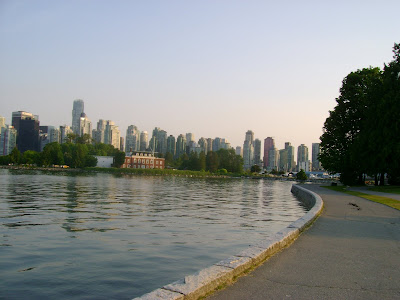 The building to the left is called HMCS Discovery...sorry no time to Google that one, but there it is. Around this point there was an older woman with an unorthdox style ahead. For all I knew she was the 10K champion in Vancouver, in my mind she was the one I had to beat. I sped up and passed her. Runner's Etiquette I probably should have kept going, instead I snapped another photo giving her time to pass. Then I sped ahead again, I am a total JERK.. 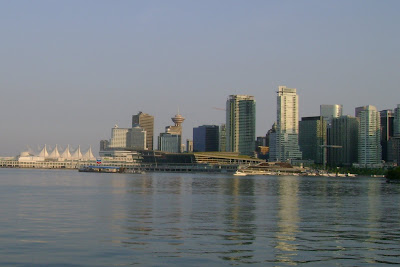 My Hotel is near the IMAX tee-pee looking things to the left, CRAZY!! When I took this photo I had a REALLY hard time getting going again. Not sure if it was seeing how far I had to go or the lack of food and drink during the day but my tank was on Empty. The last 1/2 Mile was TOUGH. It didn't help that I barely had a place to run because the path is Hopping on a Tuesday night, go figure. 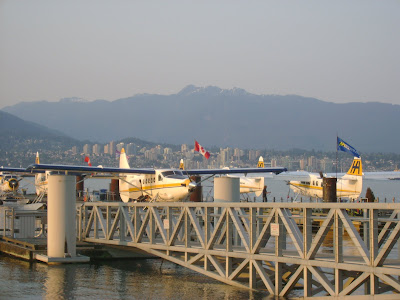 Back to the Sea Planes and we are DONE.. 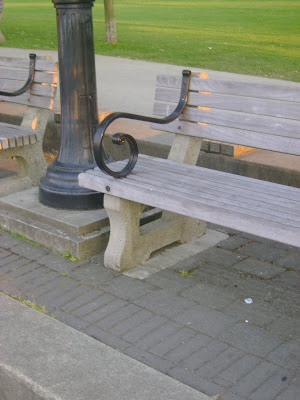 I hit stop and promptly rested on a nearby park bench. Sweaty and triumphant. Proud of my time and for getting out there while away from home. I thought about how much I miss my boys and hubby.. then my thought quickly turned to FOOD... laser focused on the Cobb Salad and Corona that I would have for dinner. YUM!! 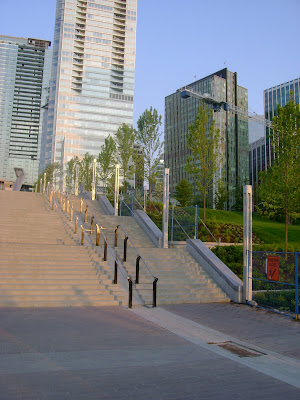 OK I know stair are good for you, but would you want to run these at the end of your 8 miles? don't answer that, just agree with me, I made the right choice. After all I still had to hike up, I meant to count the stairs but forgot..DER.. 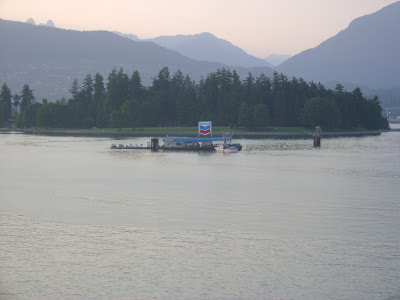 There is a path that leads near the Convention Center and has a view point. Another photo of the cool gas station, mountains and Seawall 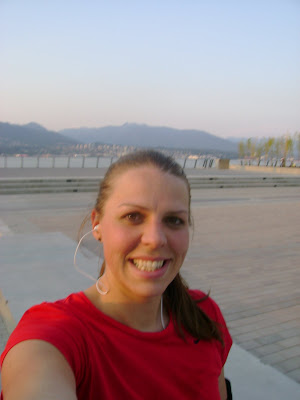 Wonderful run and I am so glad I did it and at a pretty good pace too. Learning from past mistakes I will ice my knees tonight. God Bless America that I remembered my ice packs.. Had to throw that in there since I was out of Canadian slang. Thank you for joining me on our Running Journey in Canada, hope you enjoyed your visit, EH!!
Posted by Mel -Tall Mom on the Run at 9:47 PM
Email ThisBlogThis!Share to TwitterShare to FacebookShare to Pinterest

Wow Mel - what TERRIFIC pics! I loved them! What a beautiful way to discover a city and thank you so much for sharing them!

Wow Mel - what TERRIFIC pics! I loved them! What a beautiful way to discover a city and thank you so much for sharing them!

Maybe I could go there on vacation. Great run! I am from Wisconsin, so I catch myself saying EH from time to time :)

WOW! I'd run all the time with those views!! Thank you for sharing!

NICE!!! I love the pics -- thanks for sharing your run!

Those are some pretty awesome pics! Looks like a sweet run. I love running in new places and seeing all the sights. you notice more when running than just driving around!

running is such a great way to see a place! Love the pics, thanks for sharing, eh!

You may have just made my decision to look for a marathon in BC - it looks absolutely stunning there!

Actually, what's the weather like up there in the fall? I think there's a different marathon in Seattle somewhere in November, and I really want to go back to Seattle sometime soon.

hah i saw that canada picture and before i read your caption i sang in my head oh canada. great minds i tell you.

i heart the pictures. i want to go to there. how fun on the run, so awesome.

Rookie on the Run said...

Beautiful pictures!! You are an awesome tour guide. The Canadian government ought to hire you. :)

I am jealous that you live in and get to travel to some of the most beautiful places in (and out) of the country.

Great job on the run! I bet your boys and hubby miss you, too!

I have goosebumps! (Seriously!) Great pics, and I'm jealous of the scenery you have up there. I felt like I was running alongside you as I read your blog.