Blame it on the Cake- Dreams

When I played basketball I had a re-occurring stress dream where my coach went to put me in the game but I was not ready, my shoes were not on and my hair was down. Sounds funny but those dreams caused me crazy gut rot.

Last night I had my first vivid Marathon dream. UGH!! Hubby and I were in a park trying to find my Corral #5, only there were no numbers anywhere. I was sitting on the grass looking at a map when people started running. I FREAKED!! I was not ready, shoes were not on, fuel belt was empty of fluid, and it was time.. So I asked an older lady in a pink unofficial looking shirt and she said that was the "warm-up group" and that I had plenty of time. I realized I had to go and spotted a nearby restroom. (YEAH RIGHT like there would be a potty with a flushing toilet and no line in a race with 25,000 people, only in my dreams). When I came out the Corrals had all moved and I was LOST.

Muscle man was there and we frantically looked for my area to start. We ended up in an underground building with a bunch of Goth looking teenagers and darted out a back door. Once outside it was snowing and there was no start line to be found. I could not believe that I was wearing a tank top in the snow. A few other weirdo things and I woke up…. I hope that these dreams will not take place for the next 2 weeks, talk about torture.

Tonight Hubby and I are having date night and driving the Marathon course in Seattle. Hopefully that will put my mind at ease a little. I blame it on the cake, just don't eat sugar that much anymore, my system did not know what to do…LOL!! 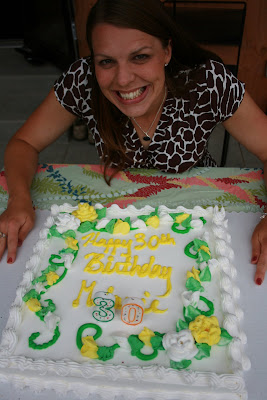 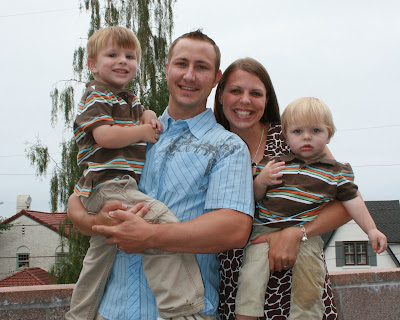 Me and my boys... FYI it is Caprisun on Easton's pants
Posted by Mel -Tall Mom on the Run at 6:57 AM
Email ThisBlogThis!Share to TwitterShare to FacebookShare to Pinterest

I'd bet that you'll have a few more of these dreams over the next 12 days... hopefully not as sugar induced, but it was your birthday, so totally guiltless :) great pic of the family!!

I totally had dreams about getting lost before my first marathon - I had one where we were running down an interstate highway, with cars zipping past us, and I took a wrong turn and got off course and they made me run an extra 5 miles to make up for it. Luckily I avoided the goth teenagers. :)

Awww, what a beautiful family. That's something nice to wake up to after those nightmares! Hopefully it was just the sugary cake making you crazy.

Had so much fun at your party, I'm happy I got to celebrate with you and family and friends :)

I'm praying for no more nightmares for you, too! I'm so excited for you and your race!

Aww those pictures are so amazing! I have had those stress dreams from bball as well as Track and they are not fun!!

oh yay happy birthday! welcome to 30 my friend. so far i am loving it, far better than my 20s, and i'm four months in! i had several 'nightmares' the few weeks leading up to my marathon, one involved a parking garage and being lost and being behind and running in jeans. gross! :) hope you had a fabulous birthday!!

i always have CRAZY marathon dreams too :) totally normal

Beautiful family, beautiful cake! I think it is normal to have crazy dreams before something big.